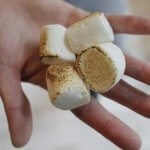 The honesty pants started out as an impulse purchase from Macy's on lower State Street. I had originally thought they were black but when I attempted to squeeze into them at home the next day I realized they were sort of an olive green. My first thought was that I had the perfect blouse to go with that color, but as I pulled them up over my knees I knew that I might never fit into these pants. The honest truth was that I knew they were too small when I took them off the rack and held them up so … END_OF_DOCUMENT_TOKEN_TO_BE_REPLACED