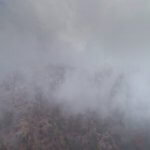 The fog was as thick as I'd ever seen on that morning. It was low and getting lower, a dark and ominous blanket reaching down towards the sea. I had driven away from Santa Clarita around eight. The sun had come up and cast a soft glow on the mountains and canyons near my house. But by the time I had left the city limits and headed into Ventura County via Highway 126 the sun had taken a giant step to hide behind the clouds. The fog covered the mountains, the pastures, and the fields of crops. … END_OF_DOCUMENT_TOKEN_TO_BE_REPLACED