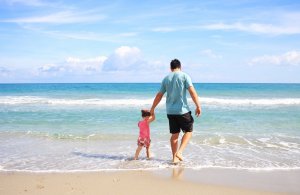 As I write this it is Father’s Day in the United States, Canada, and the United Kingdom, as these countries celebrate on the third Sunday in June. It is also observed on this same day in the countries of Qatar, Argentina, France, Greece, India, Ireland, Mexico, Pakistan, Singapore, and Venezuela, as well as almost a hundred more countries. In Egypt, Jordan, Kosovo, Lebanon, Syria and the United Arab Emirates the celebration of fathers is always on June 21st, coinciding with the summer solstice. It’s also my birthday on the twenty-first day of June so many times my special day also falls on Father’s Day.

Even though many people had advocated for decades for a special day to recognize fathers, this did not become an official national holiday for many years. The first bill was introduced in Congress in 1913, but in spite of encouragement by President Woodrow Wilson, it did not pass. Then in 1966, President Lyndon Baines Johnson issued a proclamation designating the third Sunday in June to honor fathers. It wasn’t until 1972 that President Richard Nixon signed a law declaring that Father’s Day be celebrated annually on the third Sunday in June. It has been an official and permanent national holiday ever since.

My parents divorced when I was three years old. I saw my father occasionally during the next several years, but finally he missed a few Sunday visits with me and eventually stopped calling us altogether. It wasn’t just me he had left, it was my mother as well. I used to fantasize about him taking me to the beach in Santa Monica and us walking close to the waves so the salt water would splash over us.

While other kids had parties and other special events on this day my mother and I typically went to church and then to the movies so as not to be reminded of the empty space in our home. The emptiness grew and finally it became the elephant in the room.

During the fourth grade a girl named Joann informed me that I was from a “broken” home as I was walking to the girl’s bathroom near the end of the school day. I looked at her as though she were from another planet. It was during this time of my life that I went deeper inside of myself and became an introvert with a tough skin and a hard shell to protect me. Then Joann went on to educate me as to what this meant. If your parents were not living together your home was broken. Nothing good happened to broken children. I pushed past her in the hallway and headed home before the final bell rang. I found my mother on the next block, headed towards school to meet me and walk me home. I lashed out at her with tears streaming down my cheeks.

“You make me broken. Nothing good will happen to me ever because we have a broken home.”

She didn’t say a word until we were back home. Then we sat down and she explained some things to me. I apologized for raising my voice to her. Then we concocted a story that was sure to make girls like Joann stop being so unkind. The story was just preposterous enough to sound like it was true. It went like this…

My father is in Alaska working on a very important, top secret project for the government. He will be coming home in two years and until then my mother and I are on our own. He has a dog sled to get around and loves how beautiful it is there. He writes to us every two weeks but my mother has to burn the letters after we read so our government and the country’s security will not be jeopardized. Someday the three of us will take a vacation to Alaska so he can show us around and introduce us to his friends. 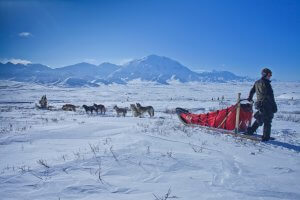 The Alaskan Wilderness – My Father and His Dog Sled

That story would get me through until junior high and then we’d think of something new to tell people.

In 1970 I saw that my birthday would once again fall on Father’s Day and I persuaded my mother to reach out to him. He agreed to come by for a visit and he did late that night. He brought a Teddy bear for my birthday and hugged me like he meant it. In that moment I had high hopes for the future.

By then I was working at odd jobs around the neighborhood, babysitting and mowing lawns until I could get a job as a waitress. My mom and I had already been homeless twice while I was in elementary school and I knew that I could help out so that wouldn’t ever happen again. I asked him why he hadn’t offered to help us over the years and he said my mother had never asked him for money or help of any kind. It was Father’s Day on my birthday again that year and I had hoped my father would have changed.

I soon learned that it was me who needed to change in order to build a relationship with my father. Years passed and we had very little contact. But every day I thought about how we would get to know each other as I got older and everything would be different. It was my dream, so it had to come true.

I was twenty-six on Father’s Day in 1981 and he and I had lunch at a coffee shop near where he lived. We talked politics and religion, and what I was doing in my life. When the waitress came by to pour him more coffee he said something to her that made me stop in my tracks. I don’t remember exactly what he said, but the intention was to make her feel like we were there on a date. I didn’t say a word, but I was hurt and mad and disappointed and told myself I would never speak to him again after that day.

In late April of 1987 I received a call from Max, my father’s attorney. I could tell by the way he said hello that something was wrong. He informed me that my father had been killed instantly in a head-on automobile collision on the Long Island Expressway in New York. He continued with some details that I didn’t want to hear. There was some real estate and other business that needed to be handled and I agreed to look for a registered letter the following week.

My plan had always been to reconcile with my father at the appropriate time. But time has a different meaning when you are young. There seems to always be something some important, more urgent, and more interesting. Then life slaps you in the face and you realize how precious every moment is in our lives.

I’ve spent my life searching for men to replace the father figure I was missing. Along the way I’ve met great men who are doing excellent things for their children. I have also met men who serve as role models to those of us who did not grow up with a father. And I’ve also met kindred souls who are seeking answers to why their fathers did not choose to become a part of their lives, like my student Freddy I wrote about here. And if you are a father who cannot imagine your life without your children close to you, I salute you for your service to mankind. For while there ain’t no sunshine when you are gone, the heavens open up wide every day you are there.

I’m Connie Ragen Green, making my way in the great unknown and forging a path through the wilderness. Come aboard and learn everything I know and use to optimize the syndication of my content and build a business as an online entrepreneur. I’m also on Twitter.