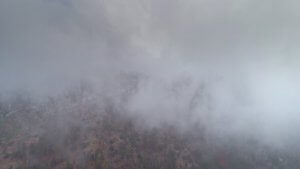 The fog was as thick as I’d ever seen on that morning. It was low and getting lower, a dark and ominous blanket reaching down towards the sea.

I had driven away from Santa Clarita around eight. The sun had come up and cast a soft glow on the mountains and canyons near my house. But by the time I had left the city limits and headed into Ventura County via Highway 126 the sun had taken a giant step to hide behind the clouds. The fog covered the mountains, the pastures, and the fields of crops. And as the highway winded its way toward the beach in Ventura it moved swiftly. At times I could not see fifty feet in front of me and then it would clear, making the road wide open but covering the mountains so that you thought you were in a different locale.

My experience making this drive on a foggy morning hundreds of times over the years told me two things; one, to make sure to drive at least fifty miles an hour to reduce the risk of a driver coming up behind you too quickly and not being able to slow down in time, and two, to not fear the situation as it is a natural part of living in this section of southern California leading to the Central Coast. I turned on my headlights, flipped the switch for my brights, and forged ahead confidently.

It’s fifty miles from the Santa Clarita Valley to the Ventura coastline. As I got closer the fog, now firmly attached to the clouds dropped lower and thickened like flour added to water to form a stiff paste. I could feel myself gripping the steering wheel too tightly so I took a deep breath, sat back in my seat, and turned on news radio.

The weather was the news and the warning was to stay off the freeways if you didn’t have to be on them. I had an early appointment up in Santa Barbara, the other city I call home. It’s eighty miles from door to door and I always look forward to getting to the point where the 126 ends and you merge directly onto the 101 freeway to drive along the Pacific Ocean for the remaining thirty miles into Santa Barbara. But I knew that would not be the scenario this morning.

Sure enough, as the sky blackened and the fog hung over me the drive became a treacherous one. As the cars in front of and behind me could see, we were being taken off the freeway along the two lanes that would take us north on the 101. I looked at the clock; 9:08. If they would allow me to choose my own alternate route I would be early for my ten o’clock appointment. But that was not to be.

With signs flashing warnings and instructions I ended up on Seaward Avenue and then forced to turn south on East Harbor Boulevard. Once I could safely pull over I engaged in some mental gymnastics to determine how I could get over to Pierpont Boulevard to cross over the 101 to head east before turning north once again. As I was sitting there for several minutes I gazed south towards the southern part of Ventura County that eventually leads into Los Angeles. The thick fog didn’t move. It was like a block of black ice, frozen in time and casting a dark shadow on the morning. If you didn’t know better you would think it was late at night instead of early morning. I wondered how far south the freeway would be shut down until this situation improved.

My quickly put together plan ready, I put the car in gear and moved forward with determination. It was now nine forty-five and my focus was on the road in front of me.

NOTE: At this very moment Kobe Bryant’s helicopter went down in the canyons of Calabasas, less than an hour’s drive from where I was. But it would be another ninety minutes before I would hear about this tragic accident that took the lives of Kobe and eight others on this fateful morning.

I did make it to my appointment in Santa Barbara. The fog had magically lifted the further north I drove and at some point the sun came out from behind the clouds to reveal a beautiful day unfolding. It was a quick meeting with one of my mentors to discuss my upcoming live event and workshop in Los Angeles. He had some ideas on how I could make it more worthwhile for those who would attend. We shook hands and I decided to drive downtown to get a new battery for my iPhone at the Apple store.

As I sat at their Genius Bar I simultaneously received a text from my CNN app and heard a scream come from someone outside the front door of the store. The text began with “Kobe Bryant among those killed in helicopter accident…” and the woman screamed “Kobe – no!” I sat frozen in my seat and asked the man sitting next to me if he had heard this news. He held up his phone to show me the texts coming through at a frantic pace. My heart sank.

In that moment nothing would ever be the same. The tech team member brought me my phone, but I wasn’t ready to leave the store. I needed the familiarity of a place I knew and the comfort that comes from being surrounded by other human beings.

As I sent and received a few texts from family members and a close friend I thought about what Kobe Bryant had meant to me over the years.

I was a Los Angeles Lakers fan long before I made the decision to follow baseball. There was a time back in the late 90s when I was purchasing tickets from a broker in downtown Los Angeles at three hundred dollars a seat. I could afford to do this once a month for three or four months each year. I also took my students to see the Lakers. Most of them had never attended a professional game. This was when they played at the Forum in Inglewood and Chick Hearn was the announcer.

Kobe Bryant was the new kid on the team and already showing sign of becoming an icon in basketball. It seemed like he had the world in his hands when he had control of the ball. He had been born in Italy before moving to Pennsylvania with his family as a young teenager. People all over the world followed and admired him as a person and an athlete.

During the 99-2000 season Kobe was forced to take some time off due to a serious injury to his right hand. As far as I know, this was the period when he decided to have more interaction with the Los Angeles community and to interact with kids. When my school was selected as one in which he would come and spend the day with the 5th and 6th grade students I was as excited as they were.

Other than saying good morning to him and the three men who accompanied him that day, I did not speak with Kobe. Instead, I observed from the sidelines as he got to know my students and taught them about life and basketball. They spent time together in the auditorium and outside on our elementary school sized basketball court. At 6’4” Kobe towered over the hoops but he still managed to get under them to teach them some moves.

When one of the boys said something to the effect that sports was for boys, Kobe quickly corrected him. Considering they were only together for about four hours on that day, it was awesome to see the effect he had on the kids. He even changed one boy’s life forever…

Steve was a tough kid from a family that gave him little support. After his father and uncle were sent to prison for gang related activity his grandmother took him in. He seldom completed assignments, cursed regularly in our classroom, and began to brag to the other kids about smoking marijuana with his teenage friends. There was nothing I was able to accomplish when it came to changing his thinking, attitude, or actions. But a week after Kobe’s visit Steve raised his hand during language arts and I called on him. He stood up, took a step back to face me and the others, and announced that he would never take drugs for the rest of his life. I asked him how he had come to this decision and in front of the class he said,

“Kobe told me to take care of my body if I want to be an athlete. That means never taking drugs and eating good food and stuff.”

Steve’s attitude changed and his behavior and actions both in the classroom and on the yard changed dramatically. I stayed in touch with him through high school and can tell you he was a star football player during that time. He was also a very nice person. I have no idea what Kobe had said to him or to the entire group on that day at our school, but I am quite sure it had far reaching effects on more than just that one student.

This was a great man, a thought leader, and someone who cared about his family and others more than himself. I can’t imagine a world without him in it. He was also making a difference in the world of women’s professional basketball, with his daughter Gianna (Gigi) as his inspiration.

I wish this fateful day could have a do-over. If only one small action could be taken back or even just slightly altered, we could have all of these people back again. But life doesn’t work that way. God had a different plan and now we have nine more angels in Heaven.

I’m Connie Ragen Green, making sense of a world in which many questions go unanswered and do-overs are permitted in business far more often than in life. Join me in this journey to create a lifestyle you will love and definitely deserve.