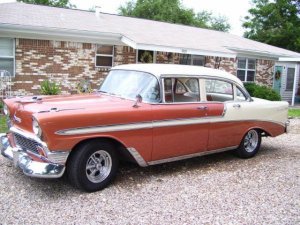 Owning a car in southern California is more of a necessity than a luxury. I live in two cities, Santa Clarita and Santa Barbara that are eighty miles apart. Also, I’m a public speaker on the topics of online entrepreneurship and mindset and need to be able to travel to locations throughout southern California and the Central Coast, many times with little advance notice. Public transportation is not a viable option the majority of the time. So when the lease was up on my Honda Pilot last spring and I decided not to purchase the vehicle or lease another one I knew I was in for an experience and an adventure.

With SUVs as popular as they continue to be, the Honda dealership was not anxious to sell me the vehicle for the previously agreed upon price. I take very good care of my cars and they could sell it as a used car for about 5K more. I no longer needed an SUV and didn’t see another model that interested me.

On the final day, April 18th, 2019 I handed over the keys, owner’s manual, and wireless headsets to the lease manager. With one handshake I was officially without a car. I walked away with my purse in one hand and a small plastic bag filled with what I had in the glove box in the other. I was only a block away from the Barnes & Noble bookstore and went inside to think.

It was more emotional than I imagined. As I went back in my memory to 1970, I remembered my first car. It was a ’56 Chevy Bel Air I had purchased for three hundred dollars. I loved the freedom it gave me, and when the transmission went out and something else was also wrong it wasn’t worth it to make the repairs. Then there was the 1960 something Triumph Spitfire convertible, my first stick shift that was fun to drive but not very practical. This was followed by a ’53 Plymouth with a “flathead six” cylinder engine that boasted 100 horsepower. When that car died in the inside lane of Interstate 95 at ten o’clock one night I knew I was done with used cars.

Enter a 1972 Chevy Camaro, sleek and shiny and all mine. It had been a demo driven by the finance manager for a few months, but to me it was brand new and perfect in every way. That car defined me for two years before I traded it in for my first Corvette.

So you can see I have always been a “car” person and to be without wheels for the first time in over four decades was a challenge. My car has always been my identity and now I was without one. Did I even know anyone who did not own a car of their own?

Who was I now? I pondered this question, expanded upon it, thoroughly examined my psyche, and discussed it with my mentors. I did this for nine months – from April of 2019 until January of 2020. During this time I had part-time access to vehicles owned by family members, but it was definitely not the same as having my own car. Each time I had to ask permission or to make arrangements to use the car, and to be specific about when I would return.

I came to the conclusion that the experiment had been a valuable learning experience for me. No longer was I being judged by the car I drove; I had long since eliminated the people from my life who felt that way. And no car could ever be my identity again; my confidence and self-esteem are much too high these days for that to ever happen. A car was just a convenient way to get from one place to another, comfortably, safely, and with no story to explain.

So now here I was, nine months later and deciding what kind of car I should buy. I’ve owned about twenty new cars over my lifetime, leased a dozen of those, been a passenger in too many vehicles to remember, and developed my preferences over this period of time. I drove through car lots in both of my cities, looked through the Sunday paper a couple of times, and still nothing jumped out at me.

Weeks later I had the idea to visit a Toyota dealer not far from me. It was a Thursday afternoon around two and as I slowly drove on to the lot I realized that it was divided into two sections – new cars to my right and used cars to my left. I hadn’t planned on getting out of the car and speaking to anyone and thought that I might call less attention to myself if I went to the left. I glanced quickly to the right and saw four or five salespeople standing under a pop-up canopy. No one saw me and I slowly made a left. The used cars were now on my left and I looked them up and down, reading the big letters on each windshield with a short descriptor.

“Take me home – low miles” said one. Another said “2017 – one owner.” There were a variety of makes and models and colors and they all seemed to be the same as I moved on to each new row. At the end I saw that across the walkway and past the driveway there was another lot of used cars. They had to be from the same dealership because there were no signs to tell me otherwise.

I found an empty parking space and slid in behind a large brown SUV. I turned off the engine and waited to be discovered. No one came. It was here that I felt a quiet peace wash over and around me, comforting me in gentle arms. The sun is coming through the windows in a way that allows me to easily see the cars parked all around me. The wind is more of a gentle breeze as I exit the car I came in and tiptoe up the aisle. I listen for the sounds of people approaching. Nothing. I reach for the handle of the beige sedan in front of me. It’s unlocked! I slide into the driver’s seat and close the door gently.

Even though I’m not doing anything wrong it feels at first as though someone will come looking for me. A silent alarm goes off somewhere in the showroom and people will come running to find out who set it off. But this is only in my imagination. Another moment passes and I am at ease.

This car is lower than it appeared but I was able to get in without a problem. I put on my seat belt and reach for the key. It’s in the ignition! I turn it and the engine starts, almost without a sound. I become aware of a new car smell, even though this car isn’t new. Thirty-three thousand miles on the odometer, not so bad. The radio is on an FM station I listen to regularly and I don’t give it a 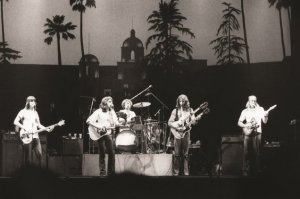 thought as I sit there, humming along to the Eagles performing “Take It Easy” at the band’s debut at the Forum in 1975. Glenn Frey looks so young and his voice has never sounded better. I can’t see who I’m with but it feels like friends. I think I’m singing along at times, and then I’m just listening to their unmistakable sounds.

The song ends and now I’m in my mother’s house on Enadia Way in the Valley. There’s a photo of me on the piano and I lean to see it’s the one where I’m standing behind a cardboard cutout of the monorail at Disneyland when it opened in 1960, smiling and waving as though I’m in the real monorail. As I reach out to touch it I turn around to spell the winning word at the 5th grade Spelling Bee and I am announced as the winner. I glance stealthily over at Joann Waldman and know that we are no longer best friends. But my eyes tell her it will be alright and that I had to win this year because I always know all of the words and do not want to pretend I don’t any longer. 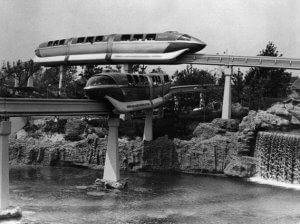 I’m at the beach during Spring Break of my senior year and Leonard leans in to kiss me. I allow it but am not kissing him back. He doesn’t let on and our friends think we’re going steady. There’s someone talking and it’s coming from behind me in line at the drugstore in Malibu. It’s a girl of eleven or twelve, telling her mother “that lady” has the shoes she wants and I smile just a little to know that I am the person she is referring to.

The car I am still sitting in must have belonged to a very happy person. I come to that conclusion as I turn off the engine and carefully get out. It’s not beige; it’s more gold or a color they call “champagne” when it’s on a car. I walk all the way around to see if there are dents or scratches and there are none. No, wait, there is a small one on the left side of the hood. That scratch is there to remind me that nothing in life is truly perfect.

The following day I will return and meet the salesman who will help me through the transaction. That’s another story for a different day. Much to his dismay, it’s the only car I want to test drive. I tell him I stopped by yesterday and this one had been left unlocked. Yes, he knows and it’s because the lady who traded it in needed to drop off the extra key and the owner’s manual.

“This car makes me feel so good. That lady must be a very happy person,” I tell him.

“No,” he answers. “It’s you. You are the happy person that belongs in this car.”

It turned out it was me all along.

I’m Connie Ragen Green, finding the feeling I am reaching for and then living into that feeling every day. Join me on this adventure we call life and find the feeling that you are seeking as a part of your life experience.