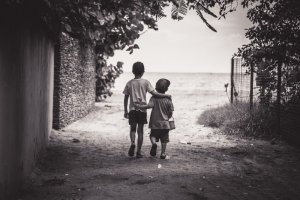 The baby cries out her first breath. She marries her high school boyfriend four weeks after graduation. She takes her last breath as she succumbs to a disease that has ravaged her body over the past few months. This time moves so quickly we seldom take time to enjoy the intermission between our first and last day.

This isn’t an audition; we are all doing this life thing each day. We must show up and make our mark by playing full out and embracing our journey. The older we become the faster time moves for us. Have you noticed that?

I once asked a teenage boy why he thought he couldn’t remember something that had occurred when he was eight years old. He thought for a moment, sifting through his mind, and reaching deep into the areas between the neurons and the synapses. His answer to me when he finally look up made sense on many levels. He said,

“That was half my life ago. It’s just too far away to be able to pull that memory up right now.”

If you have had the pleasure of spending time with a baby you will see that every moment represents a new discovery for them. Their fingers and toes, your earring, the cat streaking across the room – all are celebrated with baby shrieks and giggles of joy and wonderment. They fully intend to explore everything that comes into their consciousness with the curiosity of a scientist and the focus of a painter.

How can we give more meaning to our life and honor each day as a special one? I believe the solution is to document the events that are important to us at the time and refer to them over time. This can be done in a variety of ways; through photographs and videos; through our writing; and by using the art of storytelling to have an oral history of our lives. Let’s turn this grand illusion of life into an adventure of discovery.

From the time I was about ten years old I was enthralled with photography. The idea of freezing a moment in time and then reliving it and sharing it with others for years to come fascinated me. My mother bought me a Kodak Instamatic camera that used a 126 cartridge of film. Do you remember those? Kodak stopped producing this model in 1988 after selling more than 10 million of them and that era came to an end.

When my best friend, Rhonda Sue was killed in an automobile accident during sixth grade it was me the family came to for pictures. Her parents showed up at my house one evening while I was working on a project for school in my room. My mom asked me to bring my photo album with me and join them in the living room. Mr. and Mrs. Norris lingered on each page that included a photo of Rhonda Sue. I had chronicled her life over the past two years with photos of their daughter at school, at play, at her birthday party, and more.

The interesting thing here was that Mr. Norris was a portrait photographer, yet he had so few photos of his only child he wept openly as he asked me to describe each one to him and Rhonda Sue’s mother that night. He wanted to know what was happening in each photo, even though they seemed to me to be self-explanatory. I stood up as I told the story of why she was laughing, who she was hugging, and what she was talking about as I had snapped each one.

My mother suggested we give them the negatives to make as many copies as they wished. Mrs. Norris noted that they had hundreds of photos of their daughter’s birth and early years, but very few of her life as an older child. They had skipped the brief intermission of her life and were now at the end way too soon.

By the early 1980s I had graduated to a Nikon F2 with a motor drive and had set up a darkroom in my extra bathroom. I had also become captivated by home videos by then and owned one of the early home movie cameras while I was in college.

Even though I had always wanted to become a writer, it wasn’t until I was fifty years old I made a true commitment to writing. Once I started there was no stopping me and it was stories of my life and the lives of others I was sharing. I learned early on that stories sell, and that’s how I began earning income as an affiliate marketer in the spring of 2006. I was writing stories about my daily life and posting them on my many blogs (I hadn’t yet chosen a viable niche) and also distributing them widely on the article directories.

My stories resonated with so many people that my list began to grow, and when I began writing my first book my speaking career took off. First I spoke locally in southern California and soon it was national and finally, international events where I was invited to speak on my topics around online entrepreneurship and share my personal and business stories with people who needed to hear them to be better able to move forward in their businesses. I was using storytelling to create an oral history of my work over the years. 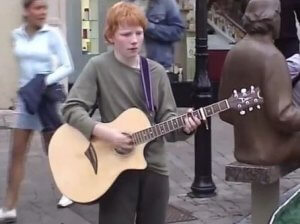 Then it came full circle, as I wrote about my experiences as a public speaker and shared the details from behind the scenes where there was even more to learn. And there are always photos; many, many photographs that tell a story hidden just below the surface, like the photos of Rhonda Sue I had taken during what would be the final two years of her short life. And the photo here of musician Ed Sheeran, busking as a street performer on the streets of London when he was twelve years old.

Photos can also tell a story of someone’s commitment to their craft. I am captivated by the photos and videos included in the music video for Ed Sheeran’s popular song “Photograph.” He is an example of someone who became an overnight success after almost two decades of hard work and study. As you watch this one think about Ed’s brief intermission of life so far and how that makes you feel. 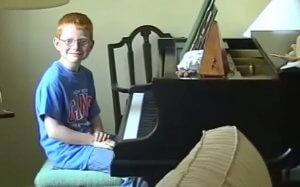 A lifetime comes and goes in a nanosecond. We must make sure to enjoy each moment and set the intention to achieve our goals and dreams. Please don’t let your lifetime pass without you being an active participant.

Are you living your life each day to its fullest? How will you celebrate the brief intermission that is your life so that it has meaning to you and others? How may I best serve you in your journey?

I’m Connie Ragen Green, making the most of my life and seeking joy and love in everything I attempt and achieve. Please reach out to me with questions, comments, and concerns as to how we may connect during the brief intermission.