I was raised by a mother who was an idealist. She turned away from her Midwestern upbringing and moved to California with my father the day after they were married in a traditional wedding at the Francis & First Street Methodist Church near downtown St. Joseph, Missouri.

California was a culture shock for both of them, but in different ways. My father was appalled at the aberrant behavior of the people he encountered. My mother was enchanted by the freedom for women to smoke cigarettes in public and wear pants instead of dresses and the insouciant attitude of the people she was now befriending.

By the time I was born in 1955 it was obvious the marriage wouldn’t survive. My mother painted with oils and watercolors and took art classes part-time at Pasadena City College, just a few miles from where we lived in Burbank. My father was an aerospace engineer at Lockheed Martin by day and worked on his degree in accounting at UCLA at night. He moved out the day after he graduated in 1958 and their divorce was final a year later.

They had chosen not to live together any longer and to dissolve their marriage due to creative differences; she was, he wasn’t. But of course it went much deeper than that.

This would be my first introduction to duality; an instance of opposition or contrast between two concepts or two aspects of something. In this case, the contrast was between two people and their fundamental beliefs, much of which had changed since they were in their twenties.

Growing up with my mother and only seeing my father sporadically gave me a birds-eye view of how idealism works within a family. Overnight my young life changed in every way. Schedules were tossed out the window. Goals were deemed unnecessary because everything was possible. Money was meant to be enjoyed until it was gone. Engaging in whatever you felt like doing was the norm and being responsible for your actions was not a priority.

Then I started first grade in public school. The harsh glow of neon and fluorescent lighting was a metaphor for this new and distasteful experience. Children and adults alike exercised no filter when it came to their words and deeds. As the lights made a distinct sound when the tubes were burning out, so I wished for these crude people to extinguish themselves or to vanish completely.

Without going into too many details, suffice it to say that I had to learn a whole new set of values and beliefs and strategies to fit in at school.

And then there were the occasional weekends spent with my father. He was the polar opposite of my mother in that he insisted on living his life immersed in reality at all times. I would be praised for my commitment to punctuality and chastised for daydreaming. Everything we encountered together was black and white with no room for any thoughts, beliefs, or ideas in the middle.

I took on new names to see which was a fit. I was Jennifer and Billie and Sage and Mary. None of them were right for me. A recurring dream where an enormous ball of fire swallowed me up and wouldn’t let go led to periods of insomnia. But no one knew because I had become a master of disguise and prestidigitation.

Where did this leave me? I became stuck in the “Gap” between idealism and reality. The longer you feel stuck the more normal and natural it feels to you. I enjoyed the benefits of living two lives with two people, neither of whom were focused on me as a priority but who both went through the motions all the same.

I learned how to walk the delicate line between what could be seen with the naked eye and that which could only be imagined. I knew what to say to whom at all times. My dance skills improved with every lateral arabesque I carefully delivered with the awkward grace of someone finding their way in the dark. Some days my neck would ache from too many spins of my head. The Gap was tricky.

You are a special person but your situation is not unique. That might be good news for you to hear from me right now. I believe you are similar in thought to Plato and believe that the only reality is the ideal world. You don’t want to accept that what is is what the world is destined to be. It is depressing to think that we are all subject to the whims of madmen and catastrophic man made events that bring ugliness to our world.

As a creative you want to see the beauty, hope, and possibility in everyone and everything you are a part of. You acknowledge the insanity but do not partake of any thought, belief, or action where the result could be less than divine.

Your task is to live in the “Gap” and to strategically balance on life’s tightrope with grace and ease. Close your eyes and imagine Michaela in Last Night in Montreal by Emily St. John Mandel, teetering in the wind on a flimsy tightrope, strung between two buildings far above the cobblestoned alley. Reflect on this and feel the gentle wind build to hurricane strength as you ascend to new heights. 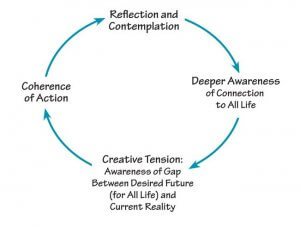 When you think out loud with a realist, be sure to focus on the reality that each situation includes. As a precursor to each dream or goal, share the obvious truth that could be perceived by someone who doesn’t dare to dream of swimming with a pod of dolphins that seem to appear from nowhere or to visualize space travel for the masses. Opening phrases such as “I know this is a long shot…” or “This probably wouldn’t happen in a million years but…”

Words have such power and cannot ever be taken back. When I am with someone who transacts in reality I envision a word bubble above my head as I am speaking with them. Each of my words appears a nanosecond before the speed of sound carries my voice to them and I’m able to take advantage of the “broadcast delay” used by most broadcasters. If I have a brain malfunction I can usually catch it in time.

When this realist has a moment of weakness or optimism or pure love in your presence, change the tone of your voice and express your pure thought. If possible, share an embrace so you can create a “tell” that will be transmitted subconsciously in the future. Attach the moment to a physical object or a pet. Cats are useful for this purpose.

Proceed with caution here, as a realist tends to be on high alert even in their downtime. Over time they will soften and trust you more, but only when they experience real results from the thoughts, beliefs, and actions you demonstrate.

When something out of this world happens for you or for someone close to you, choose to deconstruct the event, first alone and together at a later time. How can what happened by explained? Was it magic or can it be traced to reality?

In life, there is no solution to dualism. So you must spend your lifetime in this bubble. Imagine yourself in one of those human being 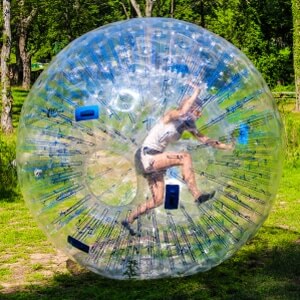 sized hamster balls, balancing your body between the outer edge of idealism and the inner circle of realism. Stay within the Gap as much as possible, while exploring the edges of that which attracts and repels you.

You are not the naive idealist Jay Gatsby, dreaming of winning over Daisy.

You are not the bitter cynic, convinced we are all doomed.

You are the “improver,” aware of what is real and what is not and willing to spend the time to push the outer circle closer to the inner circle. You are optimizing the “gap” and show great faith in doing so. I applaud and support your efforts, my friend for you are defining the possible.

“In the end that’s what this election is about. Do we participate in a politics of cynicism or a politics or hope?” ~ Barack Obama

I’m Connie Ragen Green and I am an idealist. Reality seeps into my subconscious from time to time. I nod and smile and send it on its way. Here’s to the dreamers and what they have made possible during my lifetime.