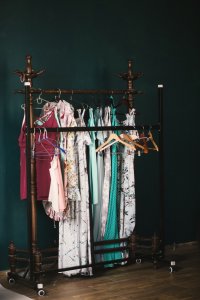 I have more clothes in my closet than I can count. And unlike Wanda Petronski, the protagonist in The Hundred Dresses my clothes are real ones accumulated over the past two decades. I can only imagine Wanda’s classmate Peggy demanding that I describe each item I own. Some tell a story, like the denim jacket I bought when my Rotary Club spent a week in Bishop, California hiking and fishing and enjoying the outdoors alongside the Rotarians from that area. Others sit anonymously on felt lined hangars and I have no memory of when or where they were acquired. I was thinking the other day that I don’t want to die with so many clothes in my closet.

It wasn’t always this way. The day after Hurricane Andrew in August of 1992 I went from having a closet filled with clothing (not nearly as much as I now own) to having less than twenty items that were salvageable. It wasn’t a big deal to me then and I must have replaced items slowly over the following months because I do not recall a shopping spree of any kind all those years ago. Slowly my inventory grew to outlandish proportions and has remained that way for twenty years or so. During this time I’ve always known I had too many clothes. It took my observing the reaction of people surrounded by them to make me see the situation from a different perspective.

While my extended family from Finland was visiting me in California for the first time during the summer of 2015 I waited for a day we would be staying close to home to make my special invitation I hoped they couldn’t refuse. I took my step-daughter and her three daughters ages fourteen, eleven, and five upstairs to my walk-in closet to look around and choose anything they wanted to take home with them. They tip-toed through my Master Suite with vaulted ceilings, past the double sinks, Jacuzzi tub, and shower big enough for three adults to stand comfortable, and into my closet. This room is the size of a small bedroom with three windows near the top looking out over the local mountain range. They stopped in their tracks when the five of us were all standing inside of this closet with plenty of room for several more people to join us.

More shocking to them than the closet’s dimensions was the contents; double rows of shelves and hanging areas with shirts, blouses, jackets, dresses, skirts, jeans, dress pants, purses, scarves, and shoes filled every space. Some still had the tags on them and others were hanging on a movable rack because I accessed these items more frequently than others.

My beautiful granddaughters stood frozen in place while my step-daughter appeared to be dizzy from what she was viewing with her own eyes. I finally stopped talking when I realized they had not moved or uttered a sound in over five minutes.

I must explain here the difference between the average home in Finland and ones in the United States. Our overall square footage (square meters for them) is larger in America. The phrase “walk-in closet” does not translate into the Finnish language; they have the word vaatehuone but it is much different and would only be possible in a home valued at seven figures or more or in a more modest home where one would be willing to give up a small bedroom or other living area. A “reach-in” closet is much more common.

The Finns also have a “less is more” attitude when it comes to clothing and shoes due to the high cost of these items in most European countries. The result is that most men would own a maximum of about fifty clothing items at any given time and women would be likely to have somewhere in the area of seventy-five clothing items, at the most. This would include jackets and shoes, but not undergarments.

So I shouldn’t have been so surprised when my little group had that “moose caught in the headlights” look and were intimidated by my offer to them to choose whatever they liked. I did convince them to try some things on and once they got into the swing of it all they seemed to enjoy the process of shopping in my closet. But this didn’t feel natural to them and my littlest granddaughter kept putting her hands over her eyes and then removing them because she thought this experience might not be real.

Every month I give away a minimum of twenty clothing items to two different charities. I imposed a moratorium on buying anything new for the entire year of 2018 and after buying more at the beginning of 2019 I imposed it once again. I also wear out my clothes over time. But none of this has made a noticeable dent in my walk-in closet so I’m ready to take drastic measures to share the bounty with those who would benefit from having more in their closets than they do right now. I am publicly stating here and now that I will make the necessary effort to find the people and groups who need what I have to give.

The bottom line is this: I don’t want to die with so many clothes in my closet.

I’m Connie Ragen Green, a good-hearted soul with too many material possessions. Listen to my latest podcast at Praestabilis; Excellence in Marketing.