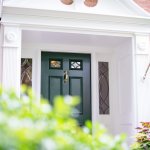 It was the summer of 1983 and I had passed the real estate exam on my second attempt. The first time I had failed by five questions and told myself I probably wasn't smart enough to be in real estate. A close friend told me that was just "stupid thinking" and encouraged me to try again. I believed the second test, a different version administered six weeks to the day later in a stuffy downtown Los Angeles high rise, was easier than the first. I never said that out loud and just counted my lucky … END_OF_DOCUMENT_TOKEN_TO_BE_REPLACED