My life is very different now from what it was for most of my years on the planet. I grew up very poor, married young, and settled into a life that was joyous and satisfying. It was also void of most material things and that became my reality. But one Christmas was destined to become the best of my life.

It was the 23rd of December, 1973 and I was on my winter vacation from my freshman year of college at the University of Florida in Gainesville. My husband and I had just found out that we wouldn’t have my two stepkids, ages four and six for Christmas that year. We were a part of a custody battle with his parents, whom had been granted temporary custody after the children’s mother had decided she did not wish to raise them. It was all tied up in the courts, with the attorneys the only ones to benefit so far.

This was long before joint custody was a common phrase, and men were seldom granted custody of young children, even if they had remarried. So when Bob’s father called to tell us the children would be staying with them that Christmas, and that they would prefer if we waited until after the first of the year to come to visit we were devastated.

There were only four presents under the Christmas tree in our small apartment and I can remember quietly walking into the living room and carefully retrieving the two that were from Santa to Matthew and Amanda. Tears rolled down my cheeks as I carried the gifts – a doll for Amanda and a train for Matthew – into the bedroom and tucked them into a dresser drawer.

What would we do now? Where could we go for Christmas that wouldn’t make us think of the kids and the holiday we had so been looking forward to? As we hugged each other an idea came to us simultaneously. We would spend Christmas with a close friend who had gone through a tragic loss just a month earlier; his infant son had passed away after a two year fight for his life.

Nick and Sandy had been together less than a year when she became pregnant. I can still remember being on my bicycle when Nick saw me and pulled over to share the news. In an excited voice he told me about everything he would do with this child, including going to baseball games together.

Sandy had three children from a marriage that had ended years ago. Her kids were blond-haired and blue-eyed like she was and a delight to be around. Nick had dark hair and eyes and when Nicky had been born he looked just like him.

Within a few weeks the doctors realized something was wrong. After three days of tests they announced the baby as being hydrocephalic, with water on his brain. They had reasons for not detecting this sooner. Now that it was out there the next steps were to save his life.

For almost two years Nicky fought to stay alive. He had lost the ability to suck and had a feeding tube inserted into his abdomen. He couldn’t hold his head up and had to be carried with his head supported like a newborn at all times. And there were elective surgeries every few months to try to extend his life. It was the last operation, when his optic nerve was damaged during one of the procedures and he became blind that made Nick and Sandy say “enough.” They simply could not bear the pain and suffering that did not bring any improvements to the baby’s condition or quality of life.

The little fellow stopped smiling during October and slowly declined until his passing on Thanksgiving Day. He was surrounded by his parents and siblings, extended family, along with close friends. I had never experienced anything so sad or felt so helpless.

Nick moved out the next day, leaving Sandy to pick up the pieces of her life with her other children. We did not judge, as no one can know what it is like to go through such a thing if they haven’t experienced it personally. We heard he was staying with someone he had just met and was drinking heavily. His business carried on without him, and it was through his employees we received updates on how he was getting.

A day earlier Nick himself had called us to say he was in Naples, about two hours from where we were in Miami and to ask if we could come to visit. At that time we thought we would be staying home with the kids for Christmas, but all of that had now changed. We each packed a small bag and readied to drive eighty miles across the state on Interstate 75, known as “Alligator Alley” because it went through the Everglades. This area is home to the endangered Florida panther, as well as hundred of alligators and other wildlife.

Our visit would be a surprise for Nick and his new friend. Our hope was that being together would help make all of us forget about our troubles and sadness for a least a few hours each day. Our hearts and minds needed this break from reality so we could deal with our lives in a positive way once again and move forward in the new year.

Nick and Rosa had rented a small bungalow on the outskirts of town. It was cozy and welcoming and we all believed this was meant to be. Someone mentioned that we should have a Christmas tree and we all piled into Nick’s car to find somewhere to get one. 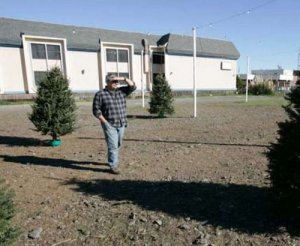 As luck would have it, there was a tree lot very close by. It had been abandoned and there was a cardboard sign at the front that said “FREE.” Of the half dozen or so trees lying all around we chose the perfect one. Nick had some rope in the trunk of his car and we got the tree home just in time to avoid being caught in the downpour that ensued.

Rosa and I had become fast friends. I think she appreciated no one bringing up the past. When the rain stopped she and I went in her car to a store called Jefferson’s to look for some decorations and small gifts. On the way there she told me she had run into Nick at the cocktail lounge where she worked just days after the baby had passed away. They had known each other years earlier but had gone their separate ways and hadn’t kept in touch. He was drunk and she gave him a ride home that night. The next morning they had a long talk and decided to be together for as long as made sense. Rosa said she had fallen in love with Nick but knew this was not the time to think about anything long term. I thanked her for confiding in me and wished her the best. We both agreed that our focus right now was making it through the holidays in one piece, and hopefully with some laughter and joy.

Between us we had less than a hundred dollars, but money was no object when it came to having fun with our friends. We played cards, watched the small black and white television, and made food together. We reminisced about old times, and Nick was particularly proud when we brought up his accomplishments as a fisherman, surfer, and entrepreneur.

At some point Bob and Nick had gone out to a store as well, because on Christmas morning there were four small gifts, creatively wrapped and placed under the tree. I don’t remember what anyone else received, but mine was a pair of decorative socks that also served as slippers. I loved them.

Later that morning I called my mother to tell her where I was and that I would see her the following day. She understood and thanked me for taking care of Nick during this difficult time and had known him as long as I had. Bob called his mother and even put the kids on the phone for a few minutes so they could tell us what Santa had brought them.

This was the hardest Christmas I ever had, but also the best one. I was with people I cared about and we had stuck together to make sure we were alright. The bond between my husband and I grew stronger as a result. We stayed in close touch with our friends and a few months later they moved to Miami so we could see each other more often. And Nick and Sandy agreed to stay friends and to let him spend time with her kids, who had become attached to him while they had been together.

I continue to think of Nicky as the tiniest angel I ever knew and I believe he is the brightest star in the sky on some nights. On the night Nick died in 2001 I went outside to find Nicky’s star in the sky. It may have been the tears in my eyes but I believe it twinkled just to let me know they were finally together again. I thought about all the baseball games they had missed and knew they now had eternity to make up for their lost time together.

I’m Connie Ragen Green, making my way in the universe and touching the lives of as many people as possible in the process.