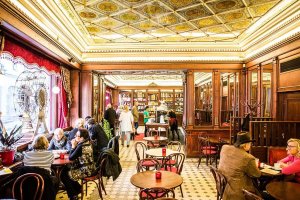 The traffic was light for a Saturday night, I thought. My gaze drifted from the street back to the other person seated at my table. She sat directly across from me, looking me up and down before she spoke.

I was in Stockholm, and it was my first trip to Europe. I so wanted to make a good impression with this woman.

Karl, the man I had come to Europe to see, had introduced her to me an hour earlier as Margaret, his school mate from long ago. I smiled, making sure to not do it too broadly, but not to hold back either. The “just right” smile was on my lips as I waited for her to speak.

“Hmm.. Never been to Europe until now.” It was more of a judgmental statement than a question, as I had offered up this fact to the group just minutes earlier.

“No, I didn’t come because I wasn’t sure where to go or what to see. I wasn’t really a student of history when I was younger and I don’t – didn’t know anyone who lived here until several months ago.”

It was awkward and clumsy, but it was honest. I was in Europe now, and that seemed to be the most important part of what she was implying.

“What do you do in America? Have you a job?” Margaret wanted to figure me out, and I was anxious and willing to oblige.

“Yes, I’m a teacher. I teach elementary school.” She tilted her head to one side and I realized she needed more details.

“My students, this year anyway, are in the 6th grade. That makes them eleven and twelve, except for Isaih; he came from Mexico and had never been in school before. He’s thirteen and we’re hoping he can learn enough English and reading skills to go to Middle School in the fall.”

I’d said too much and Margaret looked confused or disinterested, I couldn’t tell which. But I continued.

“Isaih is a Hebrew name that means ‘God is salvation’ in Hebrew. People were calling him Isaac or Isaiah, but I thought it might even be a misspelling of the name Ismael. That name – Ismael – is popular, especially with the Spanish and Potuguese versions. It means ‘God will hear’ and this was Abraham’s sons’ name in the Old Testament. And in the Old Testament, that name spelled ‘Isaiah’ is one of the most important major prophets and the author of the Book of Isaiah.”

She was silent. I thought she looked down at her watch and imagined she was thinking up a story so she could leave the restaurant and not have to listen to me drone on and on any longer.

We were distracted by dishes clanging together at a table two over from ours. Margaret turned to look back at me and I seized the moment.

“I actually mispronounced his name – Isaih’s – when he was first in my class. He told me it was okay but I told him it wasn’t okay with me and shouldn’t be with him. So he taught me how to pronounce it – his name – and after I practiced I got it right and now it’s in my brain.”

“Evidently.” She raised her eyebrows at me, then got the attention of a waitress and signaled she needed more coffee.

“It was also the name of the person who narrates the Herman Melville book, you know, Moby Dick.”

Would I ever shut up? Why was I so nervous? I needed to ask her something about herself.

“Did you always want to be a journalist? What types of stories do you write? Did you go to college to learn this style of writing?”

Boom, boom, boom, my questions flew at her like torpedoes and landed solidly in her face.

“Yes, all types, and no, I’m self-taught, for the most part. Writing is my life.”

We sat in silence for a few moments, allowing the chatter of other patrons to wash over us gently, as a reminder to me that you can learn much about a person simply by sitting across from them.

Margaret smiled. Then, she crossed her arms and sat back in her chair.

“Do you do anything besides the teaching? How else do you spend your time?”

“I’m a real estate broker.” I decided not to share the details unless she asked. I bit my tongue until I tasted blood to keep myself from speaking again until she did.

“Really. Why would you do both? There must be a story there and I’d like to hear it.”

And so she would. I went on for what seemed like an hour, sharing the details of why I had gone into real estate in my early twenties, why I became a teacher, and why I’d decided not to give up real estate after earning my teaching credential and getting a job in the classroom.

Her face lit up, and each time it did it encouraged me to provide more details. I leaned in and went back in time to when I was a child to make my story more interesting and complete.

I had grown up very poor, raised by a single mother, and we had always wanted to live in a house of our own. When I was twelve, I read an ad in the Sunday newspaper about some land for sale near a place called Orlando. We were living in Miami at the time and it was a couple of hundred miles north of us.

So I saved up the money I was earning from mowing lawns and babysitting and other odd jobs. Then, I bought a money order at the post office and mailed it to them for the down payment and first payment of ten dollars each, so twenty bucks in all.

One day about a month later, there was a knock at the door and a man asked for me. My mother told him he had the wrong address until I jumped up from doing my homework in front of the television and I announced that he was looking for me. I had neglected to mention to her that I was now a property owner, even if it was raw land and we weren’t close enough to actually see it or walk on it.

The three of us sat at our kitchen table and my mother signed her name to make it all legal. Then the man asked us if we’d like to fly up for the weekend and visit the property. Neither my mother nor I had never flown, but we mustered up the courage to say yes, we would come.

“What happened to that piece of property?” She was leaning in and maintaining eye contact, a sign, at least to me that she was more interested in the end of this story than in the part in the middle that I so wanted to tell her about.

“I paid it off while I was in college and a few years later sold it to a man I met who was looking for investments. The land had appreciated significantly after they opened Disney World in ’71, so I used the money as a down payment on a house in California.

There it was. Margaret had come to the conclusion that I was someone worth her time. That hadn’t been so difficult, after all. Perhaps I was more interesting than I gave myself credit for being, and maybe I was even smarter than I thought. But none of that mattered. The only thing that was important was that Karl would hear from her that I was a “keeper,” however they described that in Swedish. I knew he wanted to marry me and having his friends from childhood get to know me was his way of vetting me before he got too involved.

I excused myself to the ladies room and took my time about it. I needed to think this through and work it out in my mind. It will be okay, I kept telling myself, but I was crying by the time I locked the door to the water closet behind me.

Clever. I thought of monkey’s as being clever, but only because they were smart when it came to getting what they wanted. Was it a compliment? I’d taken it that way and thought I should leave it alone. Clever Connie. Connie the clever little monkey. I washed my hands, threw cold water over my face, and attempted to shake it off.

Upon returning to the cafe floor and spotting our table several minutes later, I saw that Karl and another man had joined Margaret. They were laughing and reminiscing about their school days. Karl embraced me and kissed me on the cheek and I knew he could tell that I’d been crying. His gentle gaze into my eyes put me at ease and we all sat down.

Dinner was served and I had the Swedish meatballs. They were served with the creamed mashed potatoes I loved instead of the more traditional salty noodles and I silently congratulated myself for noticing that on the menu. As we ate and talked and laughed, my smile was broader than usual and totally inappropriate.  Clever indeed.

Over the next few months, I came to define the term clever in a way that honored Margaret’s intention and my opinion of my own self-worth. A person is clever when they excel at problem solving and are able to achieve even the loftiest of goals without the benefit of advantages others may enjoy. To be clever is to be able to create a lifestyle by design and on your terms.

I’m Connie Ragen Green, navigating my way around the globe with joy, patience, and wonder, Come along with me, if you will and we will discover the secrets and mysteries of the universe together.