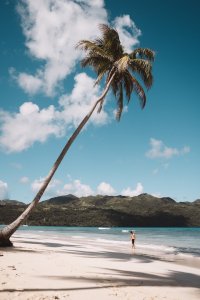 There is a photograph of me on the bookcase that sits perpendicular to my desk and work area. In the photo I’m smiling and the sun’s reflection off the ocean behind me gives the impression that it was taken in a studio with a backdrop instead of on Kaanapali Beach behind the Hyatt Maui Resort in Hawaii.

Taken on a vacation in the winter of ’86, I’m wearing a floral print, button down shirt I had just purchased at the local “Hilo Hatties” outlet and shorts that now seem way too short. From all indications, I appear to be happy and healthy and having the time of my life. On the inside, I was dying a little bit more every day.

At that point in my life, I had just ended one relationship and jumped into another. I’d been widowed three years earlier, and my now teenage stepchildren had chosen to return to Georgia to live with their grandparents. There had been too much sadness, loss, and drama and they craved a life that promised to be boringly normal. I understood, but it hurt.

It would be twenty years before I would discover the secrets to my universe. Creating a lifestyle by design is a gift and a choice. Yet, it took time for me to lean in to the belief that I was deserving and destined to reach a potential that was unlimited.

We are all in the process of becoming the person we want to be. While I worked as a classroom teacher over a twenty year period, that became the mantra and affirmation I used with my students to give them hope for their futures. If only I had believed it to be true for myself as well at that time, perhaps the precepts I expounded would been more believable in their eyes.

Why Is It Important to Explore the Space Between Hope and Synchronicity?

In the film Shawshank Redemption you may know that hope is a recurring theme. In the beginning of the film, when Andy and Red are becoming friends, Andy says,

“Remember Red, hope is a good thing, maybe the best of things, and no good thing ever dies.”

Red replies, “Hope is a dangerous thing. Hope can drive a man insane.”

But in my experience I find that it’s too big a jump for our emotional guidance system to go from barely feeling hopeful to having at least a small amount of hope, and to believing in the magic of life and the possibilities of what we can achieve.

Instead, I recommend taking smaller steps to ease into the lifestyle you are dreaming of but can’t yet touch or feel or perhaps even describe in words. Most likely you’ve had glimpses of this life, whether it was while observing someone else’s joy, in a dream sequence, or while meditating or in a relaxed state. The thought and feeling may have been a fleeting one and one that you let go of quickly to return to and snap back to your current reality.

This is why daydreaming has become an important part of every day for me. Do you find yourself daydreaming? If not, explore that space and see what comes up for you.

In my case, the catalyst was a conversation that occurred on a spring afternoon in March of 2005. I was at an in-service training at the Los Angeles Unified School District’s downtown offices for a new series of mathematics books that had recently been adopted by our District. We were on a short break and I was describing to a teacher from another school some of the projects I was developing for my class.

A voice came from the front of our meeting room…

“Who do you think you’re teaching?” the man said in a snarl. He was one of the higher-ups in the District, but he hadn’t introduced himself earlier so I didn’t know his name.

“I’m teaching the leaders of tomorrow. They are our future and I’m helping them to prepare.” I stood tall and confidently delivered my message.

“No you aren’t,” he responded. “You’re teaching people how to follow the rules and be obedient so they can get a job.”

As he spoke he waved his arm at me to dismiss me. His words burned my ears and I was at a loss as to how to answer. I said nothing and looked down at my shoes.

On that day my teaching career ended. There was no overt action on my part, but the internal turmoil came like an explosion of massive proportions.

Was this truly how my superiors thought of the students I was teaching? If so, how could I break through this barrier and make a difference? If I couldn’t, why would I remain at this job?

I knew the answer. The children had no choice but to stay and fight against the tide of disrespect and discrimination; I, on the other hand could leave teaching. In that moment, I somehow sensed that I could have a greater impact on the student population I was working with in the inner city of Los Angeles, from the outside.

What If You Choose to Alter Your Life’s Path?

A series of serendipitous events began to unfold in my life almost immediately. Windows opened while doors closed. I found my voice and began to speak to others, both at school and away about my hopes and dreams and goals for the future…. mine and that of the nameless, unseen and unheard children with whom I had worked with and become close to over the past twenty years.

This new direction through uncharted waters was scary. It was my destiny and I moved forward in a way that would test me in ways I could not have imagined. How would I proceed? I had no road map or guide. I had to become the hero of my life experience in order to help those I was leaving behind. The stakes were high and I was now willing to devote my life to creating a better world, one in which everyone was on a more equal plane.

This was the first day of my seeking a lifestyle by design. This involves being open to new experiences and adventures and to getting to know ourselves in a way we hadn’t yet anticipated. It’s also about transformation, and changing who you are from the inside out. Once you understand what your life is truly about, only then will you enter the realm of consciousness that lies just beyond your current reach.

How Do You Make the Shift From Hope to Synchronicity?

I devised a plan for my escape. There had to be a way for me to leave my teaching job and change my life. I devised a plan, worked that plan, and began to build a network of people and resources who could help me to succeed.

A year after having that short conversation about my students, I gave notice that I would be resigning my teaching position, effective at the end of the school year on June 30th, 2006. There was shock and disbelief that moved like a colorless, odorless gas within the boundaries of the school. I hadn’t even hinted at what I was planning, because I knew that in so doing I would weaken my resolve to see it through to fruition.

My attitude had shifted immensely during this time, to the point that the administrators, teachers, and others noticed something had changed. One person suggested to me that I had either won the lottery and not told anyone, or had come into an inheritance. It was actually a bit of both… winning the spiritual lottery and inheriting my birthright, but I just smiled without saying a word.

I was now ready to start the first day of the rest of my life. There would be obstacles holding me back, but as long as I was in striking distance of my goals I would persevere. The stakes were life and death – the life I was ready to step into and the death of my lack of confidence and low self-esteem. I was ready for a new adventure and stepped into the light.

The photo on my bookcase that sits next to one of me in Hawaii in 1986 is one of me speaking on the stage in Atlanta in the summer of 2007. I’m smiling and giving a live presentation to an audience of three hundred people from around the world. They’ve come to hear me speak about entrepreneurship and online marketing and are hanging on my every word.

On that day I’m happy and healthy and looking forward to my future. It always makes me smile to gaze upon those two photos as I work at my computer. Twenty-one years apart, yet light years apart in regards to who I am and what I stand for in my life. In the photo from the Hawaiian trip I was concerned about my clothes and hair being just right, and perfect if possible; in the photo from the event in Atlanta, my hair is messy and I’m wearing my tennis shoes because I forgot to change into the good ones my mother had told me to wear that day. Or did that happen on purpose because I had narrowed my gap between having hope and expecting synchronicity in everything I touch.

Everything we do as a part of our life experience is preparing us for something that will show up later on. Every choice we make, each situation we encounter or are thrust into is a training ground for something much bigger and more important that we will be asked to undertake at a later point in time. Every little thing that transpires in our lives, every person and situation we encounter, and everything we seek out of our own volition is in preparation for something that will present itself later on. If you believe this to be true, it will make your life a joyful playground that unfolds in magical ways and allows you to stretch and grow and reach your full potential. This has been my experience for six decades now and I wouldn’t trade this journey for anything in the world.

I’m author, publisher, and online entrepreneur Connie Ragen Green. The intersection between hope and synchronicity is one of joy and discovery. Come along with me, if you will and let’s explore our personal connection to see if there is space for us to interact in a way that will help to change the world in a positive way.