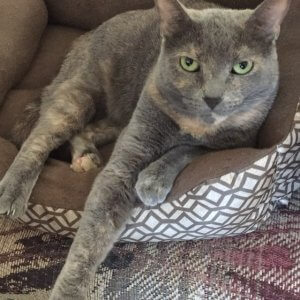 Maggie isn’t my cat; I’m just taking care of her until she dies. For you to understand what I mean by this statement and to know why Maggie is such a special creature I must tell you another story.

During the summer of 2009 I joined a Mastermind group led by Pat O’Bryan and frequented by Marlon Sanders, Joe Vitale, and others who were close friends with Pat. He had written a book two summers earlier, entitled Your Portable Empire: How to Make Money Anywhere While Doing What You Love. Today this does not seem like such a novel idea; in 2009 it was a revolutionary concept that reached the masses (I was one of them), shifted our mindset, and gave us hope and direction for our future.

In Pat’s Mastermind had weekly webinars and several of us had already achieved at least a modicum of success. Pat generously invited me and others to share what we were doing with those who were brand new to the world of online marketing and authorship. One of the people who was finding his way but obviously had tremendous knowledge and abilities was the late Geoff Hoff.

Regularly Geoff would share stories with the group, which had now grown in size and interest, and they would be around experiences in his life leading up to where he was at the current moment. Each week we would hear sounds obviously made by an adult cat, followed by Geoff excusing himself whilst he dealt with “Cat” and ultimately put her outside, kind of like the Flintstones family did in the opening sequence of their popular 60s television show.

The summer wore on. Our relationships within this Mastermind deepened, and while summer does not ever truly end in southern California, where both Geoff and I resided it does weaken a bit during the middle of October. One night, after Geoff shared details of his recent birthday celebration he calmly stated,

“Cat didn’t come back this morning. I believe she went outside to die.”

He further explained that cats prefer to die in peace, and not be a burden on their humans. My mother had always said the same thing and unlike me who adores dogs, she had always been a cat person.

Cat had indeed disappeared for good and no one had the courage to inquire about her on the calls.

The following month we all attended Pat’s UnSeminar marketing event in Austin, Texas. Those of us from the Mastermind felt an instant kinship and over those four days we bonded like long lost family members united for the first time. On one of those nights someone asked Geoff about Cat and he was forthcoming with the details. He ended the story with something about getting a new feline companion when he returned to Los Angeles.

Maggie had been in two homes that either did not want her or couldn’t take care of her. Geoff’s place was to be her forever home and Geoff was ready for this new charge to join his family. We didn’t hear much about her, except that she loved sitting on top of the keyboard while he worked and that she was great company during his long hours of writing and taking care of clients from his apartment in Culver City.

On Monday, November 16th, 2015 Geoff went missing. The following day I drove to his place in Los Angeles to try to locate him and to check on Maggie. His door was unlocked but he was not there. Maggie was sitting patiently on a chair in the kitchen and she and I made eye contact. I spoke softly to her, poured her a bowl of clean water and checked to see that she had some dry food. Then I left to continue my investigation. On Wednesday the 18th I reached a hospital where the social worker told me Geoff had passed away on Monday morning. He had come in for tests and collapsed in the hospital’s lobby. They had ruled it a heart attack.

By this time I had located Geoff’s brother. He lived in Maryland and by chance was on his way to southern California for work. David told me later he only came to California about once every two to three years. I sent him a text en route, asking him to please call me when he arrived in Los Angeles, even if it was after midnight. That’s when I told him what had happened.

Over the next week I helped to go through Geoff’s belongings and pack up what David would ship back home. Maggie appeared to be taking this all in stride and somehow I knew she would be coming home with me. On the last day I arrived with a pet carrier in hand. When I placed it on the floor Maggie walked in and curled up in a ball.

Maggie had been to my house a year earlier. Geoff had been hospitalized and I insisted he come to my house to recuperate. By this time he and I were partners on several business projects and had co-authored two books. He was family.

She was relegated to the guest bedroom during their ten day stay. Maggie was intrigued by the sounds and smell of my little dogs, but not curious enough to come out to see them with her own eyes. I think she was happier to go home than Geoff was. I had enjoyed spoiling him and felt that he was well enough to carry on by himself.

The moment Maggie stepped out from the carrier at my house she took over as queen of all the creatures who live there. She is still sure that Geoff will magically appear from the guest bedroom at some point and I only wish that were true. Her life is a good one and I talk about Geoff almost every day. Maggie is my living reminder of our eternal friendship and the joy he brought into my life and into the lives of so many. It is impossible for me not to smile through my tears when I think of everything Geoff and I experienced together.

I live in a semi-rural area with coyotes and owls and other creatures that go bump in the night, so Maggie is not permitted to go outside. Instead, she has her own private cattio where she can watch the birds fly and the lizards play and hear and smell the world around her every day for a few hours. She’s sitting under the chair in this photo, looking up at something no one else can ever see or hear. I imagine it’s Geoff telling her what a beautiful cat she is and to behave herself so she will be loved. No worries there; Maggie is loved no matter what, completely and unconditionally.

And no matter how long she lives and how many adventures and new experiences she has with me and the other humans in her life, Maggie will always be Geoff’s cat. They had a bond that will never be broken. I know he appreciates the home she has now and that she has almost everything she needs.

Perhaps now you understand why I said that Maggie the Cat is not my cat; I’m only keeping her until she dies and I hope and pray that is a long time from now.

I’m Connie Ragen Green, a cat person who also loves dogs and other creatures and someone who looks for the joy in every situation. Take a look at my books, including the ones I co-authored with Geoff Hoff to see the legacy writing allows you to create.