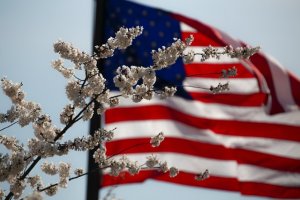 The sounds were unmistakable; full size pickup trucks roaring through the streets, slightly off balance as they gunned the engines and burned rubber. Mostly Ford and Chevy and Dodge, with a few GMC models here and there. Not a single Toyota or other foreign made vehicle in the bunch, and this was a part of their message.

Americans love their cars. Your car is a part of your identity in most parts of our country. As a little girl I strove to compete with the boys in being able to recognize and identify as many cars as possible. At first it was by the way they looked; then I graduated into knowing what was coming down the street by the sound of the engine. The Chevy Bel Air, Chrysler Imperial, Cadillac Coup De Ville, and more became a part of my repertoire. Without a father or other male role model in my life, I needed to work overtime to keep up. It was worth my time and effort and I joined the millions of Americans who love cars and find meaning and identity in them.

At age sixteen I had my driver’s license and the first in what would become a string of used cars for the next several years. Back then we only drove American made vehicles. Mine included a ’56 Chevy Bel Air, a ’62 Ford Fairlane 500, and my favorite, a ’66 Ford Mustang fastback. It was a sempiternal love, and with with pure joy I drove these cars and solidified my place as a young adult in the United States of America.

When the three pickup trucks turned off the main highway and came barreling through my neighborhood I peeked out through the shutters in my family room to see what was happening. They were out of sight quickly but I could still hear them winding their way further up the hill. They weren’t local and probably didn’t realize they couldn’t get out of our community without retracing their way back to how they had first come in. 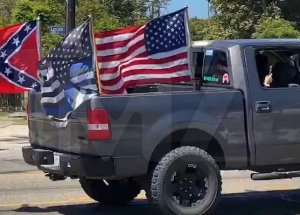 A few minutes later I went outside to check for the mail and walked down the hill without giving another thought to the trucks or to why they were here. I knew why. I let out a sigh and continued on my walk.

I should note here that although all of us have preconceived notions and beliefs around every topic under the sun, it does not mean that any of it is true in a factual way. Thinking the best of others is a virtue that I attempt to reach for every single day and I’m sure this will continue to be a challenge until I draw my last breath. When people fit a stereotype we have come to accept, I believe it is up to us to explore where those thoughts originated from and to see if we can find the commonality that exists with all human beings, regardless of the small differences.

As I approached the main street leading out of my neighborhood and on to the main highway I once again heard the full size pickup trucks, gunning their engines and traveling at a high rate of speed. The first two made it through the light and the third one slowed down and came to a stop right beside me. I slowly turned in that direction and was surprised to see an older woman behind the wheel.

“How do we get to White’s Canyon?” she asked. Her long hair was stringy and graying. Her voice was raspy and reeked of desperation. I smelled tobacco but didn’t see any smoke.

“Just turn left here at the light and keep going down this road. It will turn into White’s Canyon about a mile or so down.”

As I turned to gesture the way I saw the first two trucks waiting on the side of the highway across the street from where I was standing next to the woman’s truck.

“Where are you headed?” I asked.

I took two steps closer to her truck. Our eyes met and the pain of a hundred years oozed from her deep blue eyes. Her face was weathered. As her fragile looking hands rested on the steering wheel I saw “working hands” that got little rest. A gun rack, holding a single rifle was mounted behind her head. I quickly, and hopefully discretely glanced into the bed of the truck to see how the two flags were kept upright so they could wave in the wind when the truck was moving.

“We have to get back on the freeway. Is the freeway on White’s Canyon?”

“Yes, keep going until this road turns into White’s Canyon. Go through the intersection at Soledad and White’s and you can’t miss the freeway onramps, north and south.”

At that moment a wave of sadness and empathy washed over me. I wanted to invite this lady to get out of the truck and let the other two go on without her. I wanted take her home with me, to offer her a hug, and a warm meal, to smooth back her hair and to listen to everything she had to say. I wanted to help, but I knew my help was not wanted here. I smiled, as only one woman can smile at another and speak volumes without saying a word.

“The traffic will be light right now. Safe travels.” I took a big step backward, getting back up on the sidewalk.

“Much obliged, ma’am.” She paused before speaking and nodded, and for a single moment I thought I saw the hint of a smile dancing across her lips.

The light turned green and she turned left on to the main highway to catch up with her friends. Then they were all on their way and I closed my eyes to listen to them get further away in the distance. It would be a full minute before the sounds were no longer reverberating through the canyon and through my soul. I silently wished them a safe journey, and to have peace in knowing that people do care about one another.

Then I began walking back to my house and found myself saying out loud, “May they soar on eagle’s wings and not fear the terror of the night.”

I’m Connie Ragen Green, a visitor traveling in this space-time continuum, aspiring to touch the heart, mind, and soul of each person I meet with kindness, understanding, and love. Come along with me, if you will and let’s explore the universe together.