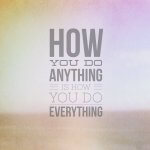 The anticipation for my live event was growing, but the panic and early hysteria was growing faster. New details regarding the virus took over the airwaves as "breaking news" throughout each day and our social media profiles were inundated with opinions, pro and con, along with paid advertisements that were harsh and ugly. It's an election year and some of what was aired exemplifies politics at its worst. I refuse to subscribe to fear, as that leads to a false sense of inferiority and imprisons … END_OF_DOCUMENT_TOKEN_TO_BE_REPLACED