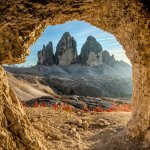 It's Your Turn to Live, Love, and Create The Tre Cime di Lavaredo peaks in the Dolomite mountains of Italy are picturesque, but they were used for strategy during World War I and even served as the border between Italy and Austria until 1919. Made of dolomite limestone, they allowed for the perfect strategy when Austria attacked Italy in 1916. It was Italy's turn to be victorious and the battle in the Dolomites was like nothing the world had ever seen—or has seen since. Now It's Your Turn … END_OF_DOCUMENT_TOKEN_TO_BE_REPLACED