I’ve never been a joiner. Sure, I’ve been a part of various groups throughout my life but it only works for me if I can be a part of it on my terms. Allow me to explain.

In third grade I started something I called the “Key Club” for the girls in my class. This came about when a friend of my mother’s left a box of keys at our house. When she asked him about it the following day he said they were leftover from over the years and that she could throw them away. He didn’t even know where most of them fit, though it was obvious if they were for a house, a car, or something else. The keys were of all shapes and sizes and my imagination took off as I thought about the story each one had to tell. I pleaded with Mom to be given possession of the tattered cardboard box they came in and she turned them over to me without question.

My idea was a solid one, or at least that’s what I believed when I started out. The plan was to choose a specific key from the box and hand it to the girl I was inviting to join. On a warm spring morning I set out to invite my charter members. First up was Jennifer and she said yes before she had her key in her hand. Three more girls – Nancy, Jacqueline, and Patty – were happy to come aboard. By Saturday I only had a few girls left to ask, so I went to the library where many of the kids I knew spent time on Saturday morning before going to Eton Park, located right behind the library for the afternoon.

Joanne was exiting the building as I was approaching the walkway. As I carefully chose the key that would grant her admission to the Key Club she took a step back and raised her arm, thrusting her open palm into my field of vision.

“I already know what you’re doing and I don’t want to join,” she said. Before I could answer she spoke again.

“My mother doesn’t like it. It’s not a real club because it’s not about anything. Sorry.”

I looked down at my sneakers as she passed by me, brushing her angora sweater across my arm and with it a cold chill through the air. She wasn’t really sorry.

What if no one else would join? Was my new club really about “nothing,” I thought?

The Key Club never met and no one ever mentioned it again. I didn’t bother to ask for my keys back. Letting it go seemed like the best idea and it died a quiet death, along with any ideas I had about being a leader.

After this experience I became a joiner, at least for a very short period of time.  Before my third grade year ended I became a Brownie, the first rung in the Girl Scout’s ladder. Next came a swimming club for girls eight to twelve at the local public pool. Before summer was out I’d joined a reading club at the public library. It felt great to be a part of each of these groups. And I was well rounded in my selections; service to the community as a Brownie, exercise and team work with swimming, and pursuit of academic excellence with reading.

It was so much fun, until it wasn’t. It seemed to always happen when someone said something unkind to me. A girl I hardly knew 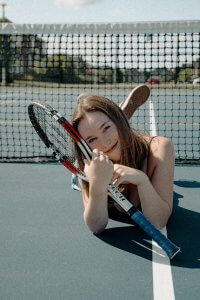 called me fat at the pool and some boys within earshot laughed very loudly. The librarian told me I was taking too long to tell her what the book I had read was about and that I needed to be more considerate of the other kids. And the girls in the Brownie troop had known each other for years when I showed up. When they realized I was from a single parent family and poor they were merciless with their taunts.

Each of these situations brought me to tears and led to me quitting the group altogether. Even when my mother attempted to work through it with me and explain how I could deal with the mean people I was encountering, I chose not to be consoled and preferred to escape by leaving them behind.

So now I not only wasn’t a joiner but I also had become a quitter. As an introvert this suited me just fine. Leave me alone and I can do as I please, at least most of the time. I was a serious tennis player starting at age twelve, and joining the USLTA (United States Lawn Tennis Association) was the only way I could get ranked as a player. But after staying with a family a few hours from where I lived for almost a week so I could compete at the next level, I quit.

There was one year while I was working as a classroom teacher where the other adults at the school wanted me to go out to lunch with them each Friday and I resisted. We only had forty minutes and going out to lunch meant piling in one of several cars to drive over to one of the fast food places. You had to be ready to jump out of the car, order and pay for your food, and then jump back into the car you had come in to get back to school as expeditiously as possible. If you dawdled or lollygagged you were left behind and had to walk back, making you late and subject to being disciplined by the administrator on duty. Then you dashed in to the teacher’s lounge and gobbled down your food quickly so that when the bell rang you could jump up, throw away your trash, and pick up your class on the yard. Now doesn’t this sound like great fun and something you’d want to be a part of every Friday? Thanks, no thanks.

The following Friday I made a paper sign and taped it to my door at lunchtime. It read:

“Meeting of the Antisocial Club in Session – Do Not Disturb”

They never asked me to join them again and I smiled as I ate my sack lunch in my room, in peace and solitude.

A decade or so passed and I made the decision to resign from my teaching position and give away the real estate clients I was working with in my part-time listing and appraisal business. My goal was to become an online entrepreneur and an author so I could work from home in solitude and earn enough to replace my previous income. But what I didn’t know until I was sitting behind my desk during that first summer of 2006, was that working alone would require me to be more social than I had ever been in the past. This is the saying that comes to mind…

Roughly translated from Italian this means, “You wanted a bicycle? Now pedal it!”

Yes, I desperately wanted the bicycle of entrepreneurship, so now I had to pedal that bicycle by doing what was necessary, what it takes to be a successful business person working from home. Yes, I would benefit by becoming a joiner and not a quitter.

Over these years I have joined and become active with a variety of groups. These include the international service organization, Rotary and the Benevolent and Protective Order of Elks, an American fraternal order that offers service in a variety of areas. After that I connected with the Boys & Girls Club, SEE International, the women’s business group, Zonta and several more. I love participating in the activities, helping with the fundraising, and making friends. I can come and go as I please, depending upon my schedule and level of interest in each group. Service organizations have an ebb and flow, with slight changes over time that depend upon that year’s leader or president and the projects taken on, locally or internationally, as well as the political climate at the time.

About five years ago I joined a group that was slightly different. It’s a service organization at heart, but within specific and restrictive guidelines. The members will do almost anything for others even if they are not members. The projects bring to light situations that are important to people of all circumstances and walks of life around the world. Yet somehow there was always a thought in the recesses of my mind that I didn’t quite belong.

All of the feelings and memories from childhood came rushing back to me. I was different, they were caught up in “groupthink” (a psychological phenomenon that occurs within a group of people in which the desire for harmony or conformity in the group results in an irrational or dysfunctional decision-making outcome) where individuality and creativity was discouraged. When a longtime member suggested I wasn’t putting this group first in my life I knew it was time to walk away.

Long, long ago I had worked as a claims adjuster for Liberty Mutual Insurance Company. As a resource for the work I was required to do each day they provided me with samples of letters I would need to dictate. There were sample letters to plaintiffs, defendants, the insureds, attorneys, and to a multitude of other people and organizations. When I had had enough of this job I dictated a letter of resignation to hand to my supervisor, and also attached a copy of it to my folder of sample letters. No one but me saw the humor in this action.

My assignment with this latest group was to write to the members who had become inactive to let them know they were cared about and to share recent and upcoming activities and projects they may wish to participate in with the currently active members. When I decided this group was no longer for me I wrote a letter to the inactive members, telling them I was now one of them. In a way you might say I quit one group and joined another, but I also see it as making a statement to the effect of wanting to have more of a say over how and when I take part in something and trusting myself to make choices that are right for me.

Quitter or joiner, I wanted that bicycle and now I am pedaling in the direction of my chosen destination.

I’m Connie Ragen Green, on a journey of my choosing to a destination filled with laughter, magic, and joy. Won’t you come along for the ride, at least until it makes sense for you to jump off?