It was the first day of school in September of 1986 and I was the most recent hire at John B. Monlux Elementary School in North Hollywood, California. Dressed in my new outfit I had ordered from the L.L. Bean catalogue I walked proudly through the gate and into the main office to sign my time card.

This was the school I had wanted to work at since I had done a long term stint as a substitute in the spring. The other teachers and parents were friendly and the administrators had taken a liking to me. As I entered the office I got caught in a shuffle of people coming in and out on this first day of the school year. The office manager, Frances Stanley motioned for me to move to the right so she could see something behind me. I quickly shifted my weight from my right foot to my left and she smiled in appreciation.

It was the bulletin board behind me that she wanted to see. It was decorated with images of crayons and rulers and other school items and said “Back to School” at the top. The bulletin board was inside of a glass display case against a backdrop of red butcher paper.

“Good morning, Mrs. Green,” Mrs. Stanley said over the cacophony of voices, bells ringing, the intercom, and cars. What a noisy place a school could be before classes began.

“Good morning, Mrs. Stanley. I’m excited to be here on the first day of school,” I answered.

“Please call me Frances. Only the children are more formal with me. May I sign you up for the October bulletin board?” She motioned behind me and I once again turned around to take a closer look.

I wondered what she meant exactly but I answered yes before thinking of any questions to ask. It would be a full week before I received the memo asking me to let the office know what I would be putting together for the October bulletin board in the main office.

Creativity was not my strong suit at that time. I thought about autumn leaves and Halloween and was sure these themes had been covered in great detail in years past. What could I come up with that would be new and more interesting? 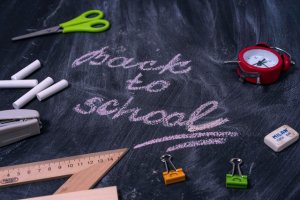 In the Los Angeles Unified School District where I was teaching they had an informal naming system for the more than twelve hundred schools. Sixteen of the high schools were named for U.S. Presidents; 58 percent of the elementary schools were named for the streets they are on; the remainder were named for notable people from all walks of life who someone thought enough of to submit their name for consideration. And then there was my school, John B. Monlux Elementary.

On my way home later that week I stopped in the office to sign out and to inquire about the name. I was sure Mrs. Stanley – Frances to me now – would know the story and share the details. I was incorrect and she simply shrugged her shoulders at me and looked back down at the ledger she was filling out.

The next morning I asked Mrs. Shannon, the new principal who had just been assigned to our school. Certainly this would be required knowledge before taking the helm. No luck there.

I spoke with Ben, the custodian who had worked at Monlux for over twenty years. I even asked the cafeteria manager and a grandmother who had told me both of her children had attended this school and now she had three grandchildren in attendance with us. Nothing, nada, zilch. No one had a clue.

It was crucial for me to discover the details, as I had already turned in the form with my theme and title. The theme was the school’s history and the title was “John B. Monlux: Man, Myth, or Legend?” This was  my attempt at injecting some humor into the otherwise serious school office.

Without a clue about who this man was it would require a super sleuth to uncover enough information for me to create a bulletin board of interest. It would stay up for the entire month of October so many people coming and going through the office would see it, or at least have the opportunity to see it.

Now you may be thinking that I could simply go to Google and do a search for this name. Believe it or not, this was before Google’s time and before computers were commonplace as a part of our lives. It was later in that school year that I had attempted to use Prodigy (remember them and CompuServe during the 1980’s?) in my classroom with the three state of the art Apple IIGS computers I had received as a part of a technology grant I had been awarded by the School District and State of California. At the end of the year they still had not approved my request. The people in charge of such decisions did not understand why I would need a phone line in the classroom when I was not allowed to have a telephone in the room. The concept of a modem connected through a phone line was not one they were familiar with. I received the form with “REQUEST DENIED” in red block letters on the last day of school. So Google was not an option and I had to get more creative and aggressive with my efforts.

At some point I decided that my local parents (half of our students were bused in each day from South Central Los Angeles) were my greatest resource for this project. First I asked my class if they knew how our school got its name and then recruited them to ask their parents, grandparents, and neighbors about this. I would give 10 Extra Credit points to anyone who had information leading to the right answer. This was back when teachers could do this type of thing without causing an international situation.

The clock was ticking and during the final week of September I stayed after school to take the old bulletin board down and to line the back of the area with white butcher paper. Frances, now a close friend and ally looked up while I worked, frowning and mumbling under her breath. As I carefully positioned each of the black letters of my title at the top of the bulletin board she finally put down her pencil and got up out of her chair to walk over to me.

“So, did you find the information you needed?” She was looking up at me with eyes that said I needed to confide in her.

“Well you can’t just make something up. Someone knows something about John B. Monlux.”

I sat down on the bench beneath the bulletin board and placed my chin in my hands. Someone knew something, all right, but it wasn’t me. What would I do? In my efforts to fit in and take responsibility and be a team player at my new school I had gotten myself into a real mess.

Where do you go when you’re looking for the answers to questions that are important, Mrs. Green?”

I knew the answer to that one. Without saying a word I walked across the lawn and over to the school library.

Mrs. Bancroft was waiting for me, or at least that’s how it seemed when I entered the library. It was a classroom turned into a library and filled to the rafters with books of all kinds, as well as rock collections, a human skeleton, and an assortment of other interesting items and artifacts.

Within ten minutes the librarian had shared with me everything she knew about John B. Monlux. He had been the Acting School Superintendent for the Los Angeles Unified School District during the early 1900s. It was during this period that the decision was made regarding appointing the first woman as the Superintendent. Even though Monlux was competent and well liked, he had to step down when Susan Miller Dorsey was chosen to lead. In 1920, Dorsey became the first female superintendent of Los Angeles City Schools. She would serve in this capacity until her retirement in 1929. In 1937 she spoke to the prohibitionist Women’s Law Observance Association against literature about “the seamy things of life” and that appears to be the most controversial thing she did during the span of her career.

My bulletin board went up on the evening of September 30th. Few people commented on it to me, at least not to my face. When I took it down on Halloween Eve a teacher from our school’s Gifted Magnet was ready to replace it with her pictures of pilgrims and turkeys and standard Thanksgiving fare. Perhaps I made a statement of some kind by attempting to explore the history behind someone who is still not easy to find with Google. I like to think of John B. Monlux as a kind, mild mannered man who worked hard for the students and teachers. It’s not possible to know what he thought about Dorsey’s appointment, but in my imagination he was thrilled to be a part of that historical moment. It was fitting that the first school I would teach at would be named for someone so interesting.

I’m Connie Ragen Green, seeking the truth in all areas and discovering the mystery and legends behind those who have all but been forgotten in the history books. Connect with me and we’ll conquer the world with fresh ideas and innovative strategies.