Is it really that simple? If you’re willing to do the work, focus on creating, and make better art, is success bound to come your way?

For decades, I was the person who talked a good game but seldom followed through. How we do anything is how we do everything, so this lack of taking action spilled over into every area of my life. I’m not proud of the way I insisted on living for far too long, but I believe that by exposing myself and being willing to be completely transparent to the world it will benefit those who choose to start down a different path. It’s all about making better art.

Life’s journey can be joyous or arduous: It’s your choice. What do you want? Or, perhaps the better question is “What did you want, at a time in your life when you believed everything was possible for you?” Before you sold that dream for a steady paycheck and a life you thought would be fulfilling.

From the time I was about twelve, I had wanted to be a veterinarian and care for animals who were helpless to take care of themselves. A friend and I volunteered at the zoo during my teen years and my resolve to achieve my goal strengthened. We took three buses to and from the zoo every Saturday and Sunday. I was still able to get my school work completed, along with my chores at home and loved what I was doing to help and care for the animals. But by my sophomore year in college I had talked myself out of that dream. What happened?

It wasn’t that I didn’t have what I believed to be good reasons for giving up that dream and trading it for another one. There were too few schools of veterinary medicine to accommodate all of the people who wanted to apply. The schools that did exist in the U.S. – I believe there were nineteen of them in the late 70s – were not located in cities where my husband could easily find work, even though he was open to giving it a try. I would have had to take out huge student loans in order to attend and it could have taken decades for me to pay them back. These reasons were simply excuses that gave me permission to give up on my dream.

My husband encouraged my dreams and showed me over and over again how supportive he would be. It was during my sophomore year at UCLA that I became enamored with the idea of practicing law. Lawyers were smart and respectable and earned a good living helping people with their legal situations. Speakers from all walks of life came to the campus every week and I made sure to attend those that had even a remote connection to the legal field.

I even narrowed down the area of law I wanted to practice: real estate. We hadn’t had a home of our own while I was growing up, so this would be a way to get closer to my goal of home ownership, or so I thought. Helping others to live the American dream felt like a worthy and respectable choice in which to live my life.

Law school came next. But first, I’d decided to take a year off after graduation and work. Each job disappointed me in some small way and I would quickly move on to the next. It was as though I was searching for a different answer to the same questions I asked over and over, in regards to life’s meaning and my place in the world. In June I applied to and was accepted to New York Law School and during the summer of 1978 we drove across the country to settle in to a new life.

I can remember stopping to have a tire replaced while driving through Oklahoma. The auto shop at Sears was connected to the mall so we spent the afternoon window shopping, eating at the food court, and taking a turn at the indoor bumper car attraction. Many people passing by wore t-shirts with a photo of a man with a beard and the name Willie Nelson below it. We had no idea who this was, but would within the next several months. 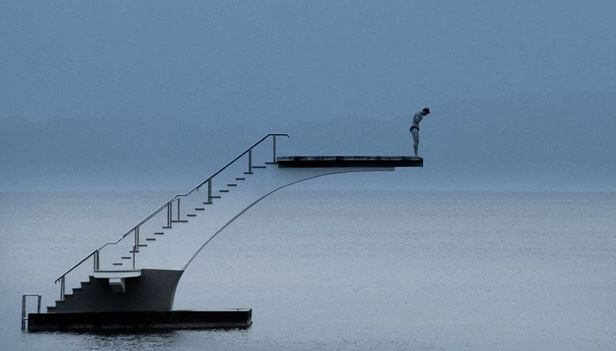 At this point in my life, I was drowning and just didn’t know it. It was as if everyone else held the secrets of living a happy and successful life and was refusing to share them with me. I was at the end of my rope in some ways, and ready to take on the world in others. I had a dream that I was at the top of the stairs and walked outside to find myself at the end of the high diving board. But there was no swimming pool, only a dark gray ocean below and gloomy skies all around. I felt naked and when I woke up my pink flowered nightshirt was tied up in knots around my waist and I was gasping for air.

Of course, life as a first year law student didn’t live up to my expectations. Law school was very different from being an undergrad at UCLA. The expectations were exponentially higher and the work and assignments more rigorous than I could fathom. I fell behind. When I did make the effort to catch up, it wasn’t enough. One morning the Contract Law professor, a well known attorney who had attended and taught at the University of Chicago before coming to New York City as a visiting professor that fall called on me to answer a question. Three hundred pairs of eyes were on me as I rose from my seat and cleared my throat.

“Pass,” I said and then sat down. That was my last day as a law student, even though I remained until the end of the school year the following May. My actions did serve as a reminder to the other students to be prepared, to do the work, and to stay on top of everything in your life so it won’t get away from you.

The following summer we returned to Los Angeles, I took a job with the phone company, and my husband was diagnosed with leukemia. I enrolled in Southwestern Law School, near downtown and fully accredited, but at the end of the fall semester I notified them that I would not be returning. The funeral was just after Christmas and my teenage stepchildren chose to return to rural Georgia to stay with their grandparents. It was a very dark and lonely time in my life and many of the details have escaped my memory.

Being alone for the first time in over a decade woke me up in many ways. I returned to writing, something I had loved to do since elementary school. At first it was poetry. I’d been a poet as a child and the sing-song rhymes took back to simpler times. I wrote about everything and nothing and saved my work on lined notebook paper I hid away in my sock drawer. For the first time in years I felt accomplished and that I was completing something special and important. Yes, I could be a writer like I’d dreamed of becoming, once upon a time.

But like everything else, my passion didn’t last and I reverted back to my habit of not finishing what I started and tossing my dreams away like old newspapers that go into the trash. I got my real estate license and told myself that was a better fit than real estate law would ever have been. I remarried and that suited me as well. Life moved on and I avoided living it to the fullest except on the rarest of occasions.

It would be two decades before I gave myself permission to become the person I was intended to be. The story of how this came to be is one I prefer to share in pieces, tiny bits and pieces that on their own are not so special but in combination are the greatest story anyone could ever tell. This journey led me to becoming a writer. Storytellers are artists and now I’m comfortable enough in my skin to embrace this as my truth. I’m a creative who writes every day. I also publish every day and it’s always a reminder that I now do what I say I will do, follow through, and help others to do the same with the art they make. How we do anything is how we do everything, yes? Yes, indeed.

Right now, begin to think of yourself as an artist, a creative, someone with a story to tell. The world needs you and the art you are now creating and will create in the future. If you aren’t satisfied with your life the way it is right now, make better art. Make better art and rule the world, or at least your little corner of your world.

Challenge yourself to take more risks with everything you do. It’s scary to go out on a limb, but it’s the only way to reach the highest branches of the tree you wish to climb.

I’m Connie Ragen Green, taking risks, doing the work, and making better art each and every day. Let’s connect and discover what we could create together that would change many people’s lives, shall we?