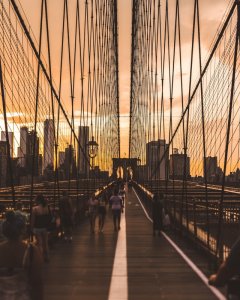 They say that children and teens are the most impressionable, but adults come in a close second. Peer pressure from adults is also more powerful, both positively and negatively than it is from children. This is why it’s so important to walk with the right people at all times.

Early on in my journey as an author and entrepreneur I heard the quote by Jim Rohn that has changed many people’s lives. You may already be familiar with it and it goes like this:

“You are the average of the five people you spend the most time with.”

That one was a big “Ouch!” for me when it came to just about every factor that can be measured.

Think back to when you were a child, perhaps elementary or grade school age. Who were your friends? Who did you want to spend time with? What guidance, advice, or rules did your family have for you when it came to making friends? Did you find yourself naturally gravitating toward the kids who were good at sports or academics, or who got into trouble on a regular basis?

There is a saying from renowned Puerto Rican author Esmeralda Santiago that comes to mind. “Dime con quién andas, y te diré quién eres,” is how it’s said in Spanish, which loosely translates to “Tell me who you walk with, and I’ll tell you who you are.”

There is so much psychology behind this concept and I am not a psychologist or even a sociologist. Instead, I’m an author, speaker, and entrepreneur who raised myself up out of poverty as a child, and spent more than twenty-five years of my adult life in careers in the areas of public education and real estate. In 2006 I made the conscious decision to leave it all behind and to reinvent myself online.

That’s when I finally realized it was time for me to walk with a different crowd and live my life in a way that would be more satisfying and meaningful. But how would I achieve this? It did not seem right to just stop seeing and talking to the people I was spending time with at the time. Would I officially break up with them by announcing I was moving on to greener pastures and different friends? No, of course not.

Instead, I slowly began to withdraw my focus from the people and activities that had been familiar to me for so long. Then I diverted my attention to the things that were a better fit for my new interests. I began visiting the public library twice a week and checked out books by the authors I was being introduced to by the groups I was connecting with online. I bought a single season ticket to my local live theatre and marked it on my calendar to attend every performance. I met a couple who hiked on the weekends and accepted their invitation to meet them at 6 am for a three mile round trip hike the following Saturday. We got along well and decided to do this every Saturday for the near future.

It was on one of these early morning hikes through O’Melveny Park where I could feel my mind rearranging itself, my thinking shifting to face a new direction, and my world expanding. While rounding the last bend on my way to the uppermost summit something inside of me changed. And when I got to the top I could see all the way to downtown Los Angeles and it was as though I had just experienced a miracle. I looked back and saw the couple who had first introduced me to this park and trail. They were holding hands and beaming with joy and pride. On that morning we had hiked over four miles to Mission Point, the highest peak in that section of Los Angeles County. And I had been so completely caught up in my surroundings I hadn’t realized I had passed these new friends and become the leader of our three person pack for the last fifteen minutes or so.

Over time the people I had been spending the most time with for many years began to slip away. It was a natural attrition, where we made plans less often and finally we had all shifted our interests, behavior, and attention away from each other and on to other people and activities. Once in awhile I would call one of them or they would reach out to me, but they were no longer my sole source of socializing and it felt more comfortable as a result. For the first time in my adult life I felt like the strong, independent woman I had always dreamed of becoming. I commanded respect and was stepping into the light and the power to make a mark on the world.

Take a look at who you are spending time with and what types of conversations and activities you are engaging in with these people on a regular basis. Even if you have been careful to only surround yourself with those who have similar values and belief systems towards the common good, I can promise you there will be one or more people who are continually messing up your natural flow. Step aside and allow that person to move on. Seek out those with the best of intentions, who follow through with the actions necessary to achieve their goals and dreams and serve others in the process. I’ve been a Rotarian for years now and the reason I was drawn to and attracted by this group is because they are living the motto of “Service Above Self.”

These days I am hyperaware of not only the people I spend time with but also of my surroundings. I’m at home closer to nature and the ocean is my favorite natural setting. Figure out, if you don’t know already which settings make you feel most alive and creative. And most of all, embrace this concept of “tell me who you walk with and I’ll tell you who you are” in a way that opens you up to reaching your full potential and becoming the person you are meant to be.

I’m Connie Ragen Green, walking alongside people from a hundred different backgrounds, numerous viewpoints, and similar values, beliefs, and goals. We walk in each others shoes, change one another’s minds, and experience life on many levels simultaneously. Sweet and sour, mild yet spicy, we are dipping our toes in the sauce of life during the twenty-first century.