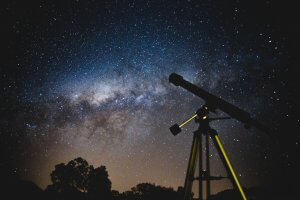 The telescope had been a birthday present during the summer of 2005. We took it outside to set it up because it was much too large and powerful for inside use. Once on the sidewalk and with instructions in hand I realized I just wasn’t smart enough to figure it all out and neither were any of my family members. I stroked the large main tube. My fingertips encircled the eyepiece. I leaned in so close to the finderscope my nose brushed its side.

Over the years we invited friends and neighbors to stargaze, but almost no one could get this behemoth to cooperate. The ritual became one of lugging the telescope outside on a clear evening and then luring someone close enough in to help us.

Once in awhile we got close to figuring it out; with just the right turn of a knob and focusing of the lens we thought we could see something. The something couldn’t be named or even identified. But the goal was to see the moon or a planet or something celestial that was current news and that we could get excited about because we would be part of the story instead of simply reading about it. Our excitement didn’t wane over the years and our exuberance at the possibility of seeing something amazing in the night sky became the main event.

Then Mario and his family moved in next door. They were from Honduras and he shared the story of how his father had been the one to get him interested in astronomy when he was a little boy. The two of them loved how the science and the magic came together in the sky and he had learned the names of planets, stars, constellations and more during those evenings so long ago. Gazing into the sky with his father’s hand on his shoulder had helped Mario to make sense of a world where very little else did, and the truths of his life in poverty were washed away by the night sky.

Friday nights were the most fun. After returning home from dinner at the Elk’s Lodge we would look to see that Mario was home. Sometimes he and his wife went out dancing, but only when they had a babysitter for their two young daughters. We could see the light in their window when they were there. They could hear us pulling into the driveway and would open the garage door to come out and join us. Mario enjoyed showing me and each of my family members how to use the telescope and would explain each step personally and in great detail, sometimes over and over so that we could own the knowledge he was so generously transferring to us.

The Great Recession that began in the summer of 2007 took its toll on the working class and it was not a surprise when Mario’s wife told us that he had lost his job the following year. They flew to Miami the following week and Mario was offered a job that was too good to pass up. Within three weeks they had carefully packed what they were taking, sold many items they would no longer have a place to store, and given us a few things, including the girls’ bunk beds that we could use when extended family arrived each summer from Europe for a month long visit. I can still vividly remember our drawn out goodbyes, with each of us thanking each of them for the friendship and what it had meant to us over the years.

The telescope was once again relegated to its box, standing alone in the corner of the family room. It was almost too sad to take it outside again. And I wasn’t going to be the one to mention is for fear of stirring up memories of earlier days and deep emotions of the loss of our wonderful friends.

Returning from a speaking engagement in New York some years later I arrived to find my stepson and grandson in front of the house. They were gazing into the telescope and lost in their exploration. As I exited my car I saw that Matthew’s hand was on little Shawn’s shoulder, tenderly guiding him to get the best view of the heavens. Tears flowed as I recalled the story Mario had told of learning about the night sky from his own father decades ago in Honduras.

Without speaking I joined them. Over the course of the next two hours we learned how to use the telescope. Between what we had picked up from Mario’s lessons and what each of us knew almost intuitively from our earlier experiences and practice we came to the realization that we each had the skill to fully utilize the power of this delicate piece of equipment. Mario had instilled a confidence in us that gave us the power to move forward on our own.

Sometimes we would set it up in the backyard, especially if we had people over for dinner. Searching for and identifying ancient living structures in the sky became the nightcap we all looked forward to and found great satisfaction in being a part of on a regular basis.

At the first of the year someone brought it upstairs so I could set it up on my balcony. I wasn’t sure what I was looking for, but gazing through the lens late into the night became a fascination for me. I could see the highway almost two miles away and the steady stream of cars flying east and west to their destinations. I could also see the mountains and a small lake, and occasionally a police helicopter or a military jet zoomed by and momentarily disrupted the gentle solitude I was enjoying. At the end of my evening of viewing I would cover the lens and carefully place a soft blanket over the telescope, tucking in the corners like swaddling a baby to protect it from the elements. 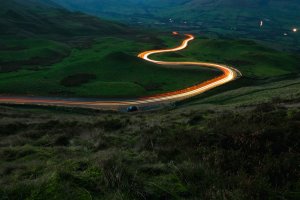 Within two months the telescope took on a very different meaning to me. The world had gone mostly silent and being able to see so far away gave me something to focus on. The once busy highway in the distance was now almost desolate.

One night in April I began to count the cars. The goal was to see how long it would take for me to spot three cars on the highway. In the beginning five minutes could pass before I would see the first one; as time stealthily marched on it took even longer. One evening I waited for almost an hour before the third car first appeared far in the distance and finally came close enough to be seen more clearly. I extended my legs on tippy toes and strained my neck to see the car as soon as I possibly could. As I exhaled I realized I’d been holding my breath in anticipation.

The three cars on the highway continue to give structure and meaning to my life. While I await their arrival at various times of the day and evening I think about my life. I tell stories in my head that sometimes make it to paper or to the computer. I daydream about the life I will have after we get back to normal, whatever that may mean in the new world. The three cars are symbolic of the power of threes in storytelling, copywriting, and the creative process. Waiting for them allows me to practice my skills of observation and patience and hope. Just three cars on the highway. Please God, let there always be three more cars coming down the highway.

I’m Connie Ragen Green, patiently waiting for the world to find its way back to its axis. In the meantime I’m writing another book and growing as an entrepreneur. Please follow me on this journey if it speaks to you.