It’s Over in the Blink of an Eye, So Make Every Second Count

As I’m writing this, it’s Sunday, October 17th, 2021 and Black Poetry Day. Each year I make note of this day by reading a poem or two written by my favorite Black poets, sharing my favorite finds with my online community as well as friends and family, and then closing the book on what this day means to me.

We live in a world where people must be put in boxes that recognize them for a variety of reasons: gender, ethnicity, age, religion, political beliefs, and so many more. If we didn’t do that, would some groups be marginalized, or forgotten, or ignored? Perhaps. Life is over in the blink of an eye and I, for one intend to take in as much as I can during my stay on this little planet I call home.

I’ve chosen two Black poets as my favorites this year. They are as different as two people could be, yet similar in so many ways. They are Langston Hughes and Amanda Gorman and to me they represent the power of the written and spoken word and how it has been used throughout the ages to deliver a message to a wider audience than they could have reached in any other way.

Langston Hughes was a favorite poet of my mother. She was also born in Missouri; she in St. Joseph and he in Joplin, just 16 years earlier. These towns are about two hundred miles apart, but their differences would make you think they were on opposite sides of the world. My mother once told me her father had taken the family to see a lynching just outside of town. She didn’t say why, but it had made her vomit in the car on the drive back home. Her father had smiled and told her to remember how she felt if she was ever tempted to treat another human being poorly.

As a poet, novelist, fiction writer, and playwright, Hughes is known for his insightful, colorful portrayals of black life in America from the 1920s through the 1960s. Hughes was an important figure in shaping the artistic contributions of the Harlem Renaissance. My favorite of his poems, “I, Too” was written and published in 1926:

I, too, sing America.

I am the darker brother.
They send me to eat in the kitchen
When company comes,
But I laugh,
And eat well,
And grow strong.

Tomorrow,
I’ll be at the table
When company comes.
Nobody’ll dare
Say to me
“Eat in the kitchen,”
Then.

Besides,
They’ll see how beautiful I am
And be ashamed-

I, too have struggled with race and class and circumstances, but my struggle pales in comparison to what Hughes is describing here. I think back to when I was in grade school and my mother ironed clothing and linens for a lady on the other side of town. I remember her home, large and bright and filled with more nice things than I knew existed in the world. One day she offered us something to eat and as I nodded yes, my mother sent me outside to play alone. I climbed a tree and fell out of it when I got to the top.

It would be two weeks before I remembered the events leading up to my fall. When I asked my mother what the lady made for our lunch that day, she cried and pulled me close to her bosom like I was a tiny girl. It would be fifty years before she told me the story, and on that day I finally knew what my mother had gone through as a single parent with a little girl during the 1960s.

Amanda Gorman was unknown to me until I read she had been chosen to speak at President Joseph Biden’s inauguration on January 20th, 2021. It turns out First Lady Jill Biden had asked her to write and deliver a poem, after hearing her do a reading at the Library of Congress a couple of months earlier. In the blink of an eye, Gorman’s life was forever changed.

“Here’s to the women who have climbed my hills before,” Gorman tweeted less than an hour after she spoke. This is what she wrote in her tweet: 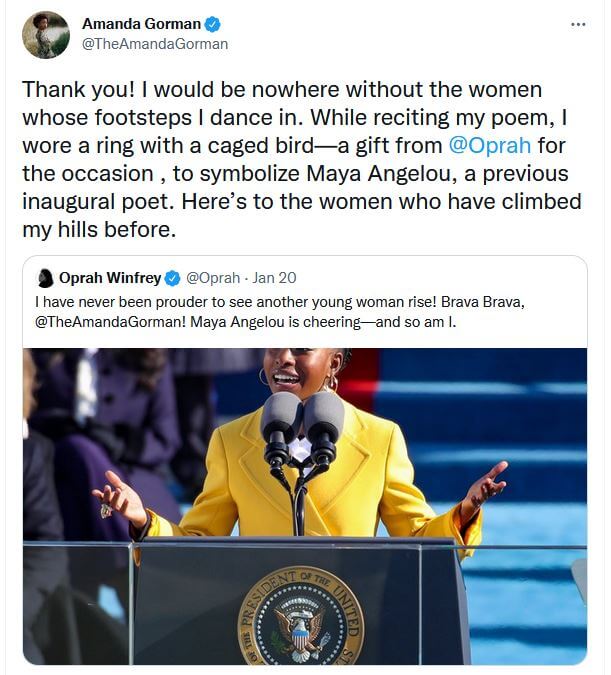 Here is the text of Gorman’s poem, “The Hill We Climb,” in full.

When day comes, we ask ourselves, where can we find light in this never-ending shade?
The loss we carry. A sea we must wade.
We braved the belly of the beast.
We’ve learned that quiet isn’t always peace, and the norms and notions of what “just” is isn’t always justice.
And yet the dawn is ours before we knew it.
Somehow we do it.

Somehow we weathered and witnessed a nation that isn’t broken, but simply unfinished.
We, the successors of a country and a time where a skinny Black girl descended from slaves and raised by a single mother can dream of becoming president, only to find herself reciting for one.
And, yes, we are far from polished, far from pristine, but that doesn’t mean we are striving to form a union that is perfect.
We are striving to forge our union with purpose.
To compose a country committed to all cultures, colors, characters and conditions of man.
And so we lift our gaze, not to what stands between us, but what stands before us.

We close the divide because we know to put our future first, we must first put our differences aside.
We lay down our arms so we can reach out our arms to one another.
We seek harm to none and harmony for all.
Let the globe, if nothing else, say this is true.
That even as we grieved, we grew.

Scripture tells us to envision that everyone shall sit under their own vine and fig tree, and no one shall make them afraid.
If we’re to live up to our own time, then victory won’t lie in the blade, but in all the bridges we’ve made.
That is the promise to glade, the hill we climb, if only we dare.
It’s because being American is more than a pride we inherit.
It’s the past we step into and how we repair it.

We’ve seen a force that would shatter our nation, rather than share it.
Would destroy our country if it meant delaying democracy.
And this effort very nearly succeeded.
But while democracy can be periodically delayed, it can never be permanently defeated.

In this truth, in this faith we trust, for while we have our eyes on the future, history has its eyes on us.
This is the era of just redemption.
We feared at its inception.
We did not feel prepared to be the heirs of such a terrifying hour.
But within it we found the power to author a new chapter, to offer hope and laughter to ourselves.

So, while once we asked, how could we possibly prevail over catastrophe, now we assert, how could catastrophe possibly prevail over us?
We will not march back to what was, but move to what shall be: a country that is bruised but whole, benevolent but bold, fierce and free.
We will not be turned around or interrupted by intimidation because we know our inaction and inertia will be the inheritance of the next generation, become the future.
Our blunders become their burdens.

But one thing is certain…

If we merge mercy with might, and might with right, then love becomes our legacy and change our children’s birthright.
So let us leave behind a country better than the one we were left.
Every breath from my bronze-pounded chest, we will raise this wounded world into a wondrous one.

Perhaps selfishly, I think of myself as I read or listen to Amanda’s words. I was a child, raised by a single mother, descended from people who worked the land in order to put food on the table, who dreamed of having enough on my own table each day. Is my story not relevant as well? Yes, it is, but it’s different.

I’ve heard that you don’t know what poverty is like until you see it for yourself in a third world country. I was nineteen when I first went to Mexico with friends for three months. I had wanted to write while I was there, but instead of being inspired I was overwhelmed at what I saw and experienced. I allowed those feelings to paralyze my hand when I picked up my pen each day. Like Amanda, I was inspired to leave behind a country, and a world better than the one I was given. I’ve dedicated my life to service to others, at home and throughout the world. I will never meet most of those I help indirectly, and this feels right for me.

I was not familiar with the term “white privilege” until a few years ago. In my mind, that referred to other white people than myself. But then I gave it more thought and saw it through the eyes of people of color. My mother and I were looked down upon as I was growing up because we were poor. But economic status can be improved upon, while skin color and ethnicity cannot. And people of color throughout the world have it especially hard. The children are hit the hardest and most directly, as they are the vulnerable ones.

Spending a few weeks working in an orphanage, in the Khlong Toei slum outside of Bangkok, Thailand opened my eyes in a way that made brought me to my knees as I greeted the rising sun each morning. Father Joe Maier has spent almost 50 years caring for the poorest children and bringing them a quality of life most of us take for granted each day. I climbed some hills of my own during my time there, as did those who accompanied me on this visit to Thailand. In the blink of an eye, we were back in the States and awash with the differences we could now understand, at least a little more than before we left home.

I’m Connie Ragen Green, forever searching for answers and feeling my way along the path of life to discover the wisdom that awaits. Come along with me, if you will and we will explore the future together in the blink of an eye.