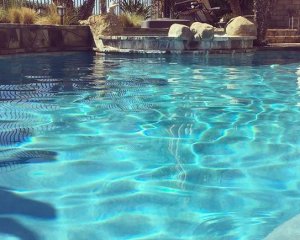 I have discovered that I do some of my best work while swimming in the pool. I think of this as the unbearable lightness of swimming against the almost imperceivable current. This got me to reminiscing about an experience that took place more than half a century ago…

It was the summer of 1960 when I first learned to swim. We were at the Riviera Hotel in Palm Springs for a long weekend, my mother and the man she was dating, David. That pool looked like the entire Pacific Ocean to five year old me. My birthday was coming up in less than two weeks and this trip was presented to me as an early birthday gift. I was impressed and ready to dive in. The missing element was having the ability to swim.

Over the following four days I had more fun than I knew was possible. I splashed around in the shallow end, put my face underwater but didn’t open my eyes, and made many new friends. In the pool I couldn’t tell if some of them were boys or girls or kids or grownups but it didn’t matter. I was in my own kind of Heaven.

At night when my mother was tucking me into bed in our hotel room I remember telling her it felt like I was still in the pool. I could feel the water all around me and the motion from the waves created by so many people swimming simultaneously. She put some drops in my eyes, itchy and red from the exposure to so much chlorine.

Swimming in the ocean can be an intoxicating experience; you are omnipotent and powerless all at once. The supreme almighty human rendered helpless by a massive wave or a sharp rock or a passing sea jelly. That had been my only experience up until this time. But in the swimming pool the only opponent is another human, or a rogue plastic toy, or the wind, or the lack of air when you go under for too long. When I did go under the water for what felt like forever that weekend there were seemingly scores of people at the ready to lift me up as I coughed it out. The sixties were shaping up to be a magnificent decade in my eyes and from my youthful perspective.

By day two I was determined to learn how to swim. I wasn’t sure what all that entailed but I knew that my goal was to finally get into the deep end of the pool where the older kids and adults preferred to linger. As I turned one last time to see the toddlers and elderly people cautiously making their way down the steps and into the shallow end, I heard a woman call my name.

I pivoted my small body to see her more clearly. I was looking almost directly into the sun and I could see her waving me over closer to her. I closed my eyes, took a deep breath, and dog-paddled my way to her side. When I came up for air I wasn’t coughing or gasping and everything around me appeared to be moving in slow motion. Then I heard her break into song. It went something like this:

I heard myself singing along and she took my hand. Everyone else was getting out of the pool, slowly at first and then in a mass exodus of sorts as some headed for the steps and others pulled their bodies up and over the side and on to the deck. The sun was high in the sky now and I thought it might be time for lunch. But I was not hungry or thirsty. I was mesmerized by my new friend. I could see more clearly now and she was dressed in a soft yellow chiffon gown made of silk and lace. As I looked down into the clear water I saw that this garment was full length and she appeared to have no feet. That made me giggle and as I asked her name she whispered “Muriel” in my left ear.

She was kind and gentle as she demonstrated how I could easily swim on my own. She had my hand again, or at least the tips of my fingers and she floated effortlessly

alongside me as I swam mostly on my own. When she would let go of me I felt like I was all alone and quickly searched for her hand again. I was doing it – I was swimming!

Up and back, again and again from the shallow end to the deep end. The water tickled my nose. Sometimes it was like moving through thin air and at other times it was like slogging through jello. I was getting to know how the water reacted when I went through different motions with my body.

“Muriel, look at me,” I called and she answered quickly.

Or was that my mother answering me?

At some point Muriel lifted me up and out of the water and I could see that everyone had returned to the pool. I looked for my mother and David and finally spotted them in the same place they had been sitting earlier. Mom waved for me to come join them and I could see she was holding up some food on a plate. She wanted me to have lunch with them. I swam with confidence and joy and bounded out of water to get to them.

“I was swimming. Did you see me?” I exclaimed.

“I sure did. You’re like a little fish.” She hands me my plate. It’s grilled cheese and some potato chips.

“Muriel taught me. Where’s Muriel?” I use one hand to shade my eyes and the other to hold my plate as I scan the pool and deck from side to side.

My mother was silent for a moment before she spoke again.

I looked out into the pool but didn’t see her now. But I could hear her singing again…

I don’t remember eating my sandwich and chips. My only memory is of my mother taking me firmly by the hand and walking with me back to our room. I turned one time to see David stretched out on a lounge chair and waved, but he couldn’t see me. After my nap my mother sat on the side of my bed and told me a story.

Muriel was my mother’s mother, my grandmother. She had passed away just days earlier and my mom hadn’t told me. She later said that it was just too difficult. I had only met her once as an infant and didn’t miss her because I didn’t know her. Mom cried softly and I hugged her tightly. It would be the beginning of my life as a caregiver to her. It felt natural and the right thing to do.

Years later I was a Big Sister to a girl named Tanisha. When she was about twelve she made an astute observation after meeting my mother for the first time. After we had driven away from my mother’s house she said,

“It’s like you’re the mother and she’s the daughter.”

I smiled and squeezed Tanisha’s hand as we entered the freeway ramp to go on to our next adventure. Now that’s a story for another day.

In the swimming pool I am weightless, I dance ballet to the water rippling with the gentle wind, I am everything and nothing and all things are possible…

I am Connie Ragen Green – storyteller, swimmer, marketer, friend to phantasmagorical creatures, and someone getting as much as I can from this life experience. And I optimize the content I syndicate as well.