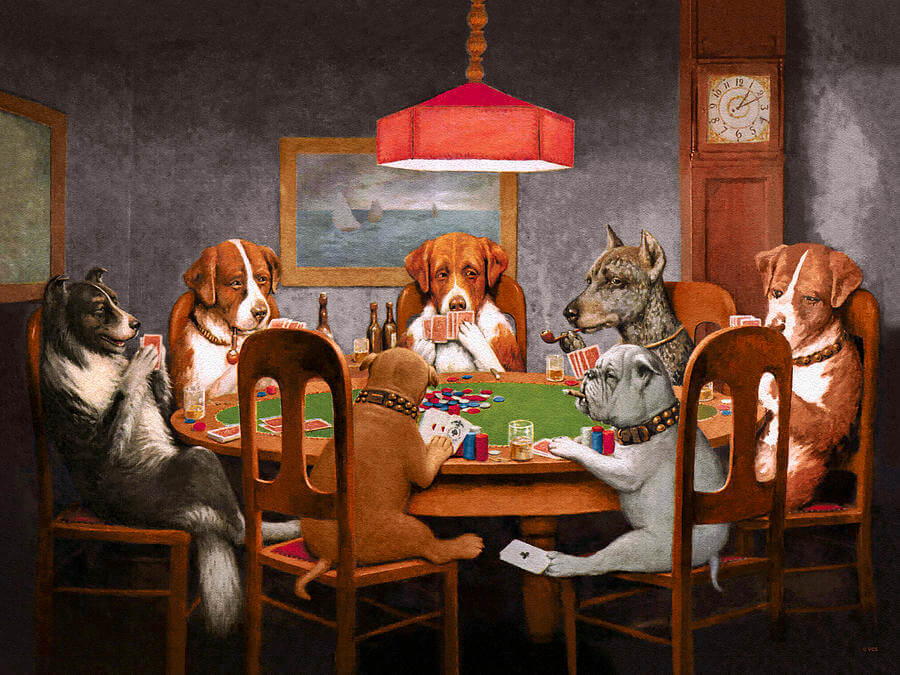 He insisted that I be included in his Saturday night Poker game, even though I hadn’t made that request. Winning more often than the rest of the guys put together made him something of a legend. So I showed up and took my seat at the opposite end of the table from where he sat, though I wouldn’t understand why until almost an hour into the game.

The men watched my every move as we played. In this setting, the dealer chose the specific Poker game we would play for that hand. I’d been playing for years, but switching from one game to another was a bit much for me to keep up with. All eyes were on me as the evening wore on. Then it happened: One tilt of my head and a glance in his direction set them off. It was as though the world was coming to an end.

I soon figured out they thought I was a more experienced and accomplished player than I actually was, pretending to be a novice. They were sure I would look to the boyfriend for help when I wasn’t sure what to do. If he helped me in even the smallest way, I could win the hand and move closer to the top in terms of hands won. The idea of someone new – and a woman! – lapping them for the coveted top position was more than any of them could bear. Their weekly game would be tainted and in their minds, ruined.

So I did what any self-respecting person – male or female – would do under similar circumstances; I didn’t look at him at all and instead played the cards the way I saw them at that moment in time. Within a month I had become the second most winning player in the group and the men began to respect me in a way I had not expected.

His family had wanted him to marry me. His mother invited me for lunch at their home one Saturday afternoon and we had a discussion about her son’s future. He was the eldest of three children and she and her husband had plans for their children’s futures. She was most complimentary in stating her reasons for believing this was a good match for each of us and asked me to invite my family to meet them. That’s when I backed off, a little at first and then in a way that sabotaged what could have been. Even though I’d worked on being more of an ambivert around people, the introvert in me went into overdrive on that spring afternoon.

The relationship ended a year later over things of great importance but little significance. Mutual friends updated each of us as to the other’s activities, as there was still some affection attached to our time together. He was driven to succeed in a career, so I was not surprised when he passed the Bar exam and became a CPA the following year. What did surprise me was learning he had ventured into politics in Orange County, a then conservative County located just south of Los Angeles.

A few months later I happened to see a cover story in the Community section of the Orange County Register, where his photo showed him speaking at a British Pub called Bangers and Brew. He had mistakenly referred to it as wankers and brew, much to the dismay of the owners of the establishment, as well as their long-time patrons.

I’d almost completely forgotten this man, the events surrounding the time we’d spent together, and our relationship because there wasn’t much about it that was memorable. But every once in awhile something circles around to a memory that still resides in the recesses of my mind.

What I find even more interesting is that he is now a City Council member, as well as part owner of the pub in question. One of his friends tagged me in a post on Twitter where he was quoted as saying “They vaccinate dogs, don’t they?” when asked about his push for vaccine mandates in the local schools and businesses. There he was, wearing a gray pin-stripe suit and sporting Raybans and I laughed out loud as I scrolled down the page. Then I saw the people in the crowd glaring at him. One woman was holding on to a pit bull and may have been offended by his comment. A young girl was holding on to her upper arm, as though expecting to be grabbed and vaccinated against her will.

People come in to our lives for all kinds of reasons. It’s up to us to separate the wheat from the chaff, learn what we can about ourselves in the process, and to then move closer to a life that will be most meaningful in the journey we have chosen.

I’m Connie Ragen Green, still playing cards but only a legend in my mind. Let’s connect and see what the future might hold for us, shall we?