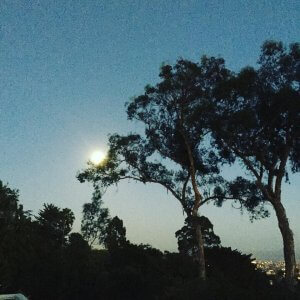 “Tell me again what you do with him when you go into that room.”

We were in the new offices of the production company where I’d been hired for a summer position. They called me a production assistant or “PA” but I was really a gopher – someone who went for coffee and picked up people at LAX and did all kinds of things the others didn’t want to do. I was thrilled to be there and didn’t mind anything they asked me to do during this time. It was an adventure and I wanted to breathe it all in and digest it to shift my thinking and change my life.

“There’s a big machine in there, taller than me and so long that it takes up half the room. He gives me the stack of papers to be sent to either the Paris or Tokyo offices and I feed them in, one at a time. I have to do it slowly and they have to be face down. Then the machine makes a little sound, and I walk to the other end and take each page out, one at a time. If the pages went through, there’ll be a small, faint red mark on the back of each page. When they’ve all been fed through and each one has the red mark, I go find him and let him know.”

Michael shifts in his chair, stroking his chin whiskers and looking me in the eyes while deciding what he’ll say next.

Then he goes into his office behind the room with the machine and calls them to make sure they’ve received all of the pages on their end. If it was sent to the Paris office, I hear him speaking in French. He speaks English to them if they’re in Tokyo.”

It was, indeed. I heard him – Jerry was his name – refer to the machine as a facsimile one time, but I wasn’t familiar with that word back in 1985.

NOTE: In 1964 Xerox Corporation introduced LDX (Long Distance Xerography), an invention that is considered the first “commercial” version of today’s fax machine. The ITU G3 Facsimile Standard was developed in 1980, primarily by Japan’s domestic telephone company NTT and overseas telephone company KDDI. This standard helped lead to a surge in fax technology, both as a national and international form of communication.

It was in 1985 that GammaLink introduced the first computer-based fax board, the GammaFax. While the first boards were problematic in some instances, as documented by one 3rd part user FAQ, the GammaFax was a major was a major advancement, as it brought computers into the worldwide network of fax machines, which at the time was much more wide-ranging than the internet was.

While computer-based faxing led to activities such as broadcast faxing and massive junk faxes, it also brought the ability to manage and manipulate faxes to the smaller scale.

We were sitting in chairs out on the balcony that overlooked the freeway. It was noisy and polluted, but we both enjoyed having a little time to talk before going back inside. I pulled my chair up closer to his. The metal scraped the concrete beneath us, making a screeching sound that could barely be heard above the din of the traffic.

“He told me last week that in the future that machine will become small enough to fit on a desk, and everyone could have one at home. And, we’ll all have something like a computer we can carry around in a packet or purse. And it will have a camera, and games, and a way to talk and write to other people without having to be inside or plug anything in, or…”

“And you said you weren’t into science fiction, Connie. What do you call all of this he’s been telling you?”

I thought for a moment and gazed out past the freeway, towards the homes up in the hills of Encino, south of Ventura Boulevard – “THE boulevard” and wondered what it’d be like to live there, or even to visit someone there.

“The future, I guess. I can’t picture any of this happening in my lifetime. I didn’t even know you could send papers to another country with a machine, until I started working here. He says they’ve had those for awhile now, and they’re getting smaller all the time. Maybe when we’re twice as old as we are now, some of it could come true.”

“What would that be – 2015 or so?” His laugh was condescending, like he didn’t believe anything I was telling him. “Next, you’re going to tell me that you’ll be able to pull that tiny computer gadget out of your pocket and contact people all over the world, maybe even on a different planet if you need help with something important.”

With that, he leaned against the back of his chair, closed his eyes, and crossed his outstretched feet. He was wearing hiking boots and as I stared down at them I imagined how hot and smelly his feet must have been.

“That could happen,” I answered. “What if you wrote a script that lots of people read and really loved, but the producers and directors and people in charge weren’t so sure they they wanted to take a chance on it – and on you – with so much money and people’s reputations at stake? If would be pretty cool if you and I and everyone we know could ask people all over the country – heck, all over the world, to show they would watch it and maybe even pay to watch it on television, and we could get them to all send some kind of message to the exact people who needed to see it, all at the same time on the same day. Wouldn’t that be cool?”

“So, not a telepathic message, but some kind of real message that would make a difference and change some minds? Your future does sound very cool.” Michael stood up from the table and outstretched his arms. He was short in stature and showed the beginnings of wrinkles and a few gray hairs around his temples. “Now I’ve got to get back to work on the script I’m working on. If I can finish it by tomorrow, you can give me a life into Hollywood so I can deliver it to the studio. Or, maybe you have a spaceship that would get us there faster.” He outstretched his arms again, making motions into the sky and mouthing something I couldn’t quite make out with the traffic noise in the background.

I had a pager, provided by my employer – Liberty Mutual Insurance – to make it easier for them to reach me after work and on the weekends in 1982. It was helpful, but when you were near the ocean or the mountains, as I am regularly in southern California, you were out of range to receive the signal.

It would be 1989 before I had my first mobile phone. It was called “The Brick” and each minute you talked was very expensive. I had people page me – I then had my own pager – and then I could choose how I would call them back.

The first text message – SMS – was sent on December 3rd, 1992… seven years after the events I’m sharing with you here occurred. It was sent by an engineer in the UK to a colleague and said… Merry Christmas! My family in Europe began texting the following year, and it would be several years later before this technology was embraced in the States.

I have my own ideas as to what I’d like to see in the near future in terms of technology. How about if we could use a fingernail on one hand to write on the opposite palm in order to send a message or make a call. Perhaps we’d have to have a chip or something inserted just beneath the skin for this to be effective, but that sounds a lot like science fiction, don’t you agree?

Everything we do prepares us for the future, I believe. I’m Connie Ragen Green, living my present situation to the fullest and ready to embrace the future. When you believe in magic and the possibilities that await, everything is simply a few action steps and habits away from being our reality. I share some of this in my books, especially one I published at the end of 2022 titled Essays at the Intersection of Hope and Synchronicity.