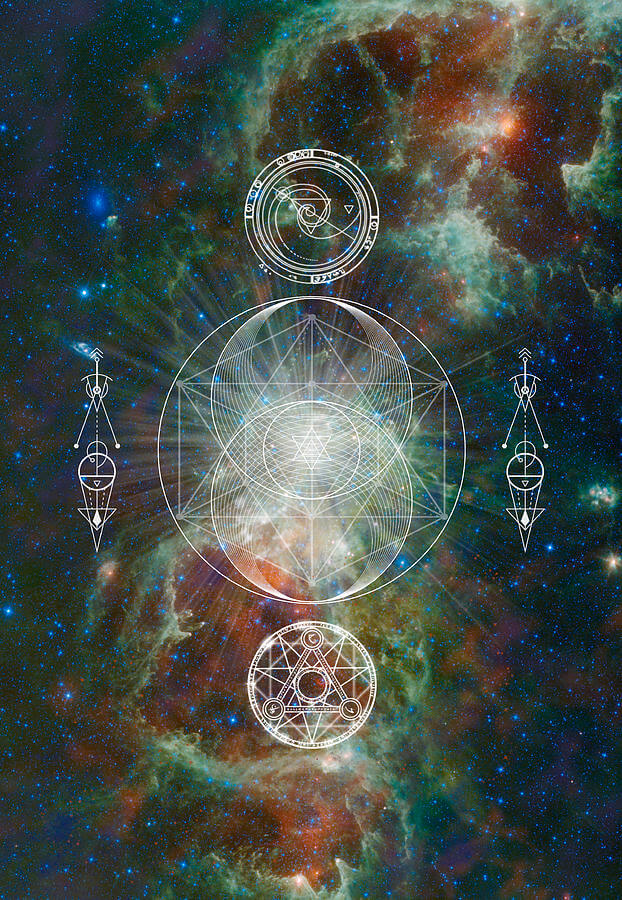 What Is Sacred Geometry?

Many teachings define sacred geometry as an ancient science that represents the blueprint of creation, the origin of all forms. It is a science that explores and explains the energy patterns that create and unite everything. More precisely, it defines how the energy of creation is organized.

Geometric codes create all life forms, including DNA molecules, crystals, galaxies, stars, snowflakes, the cornea of the eye, and snowflakes. All forms have spiritual meaning – numbers, patterns, and other shapes. With sacred geometry, we can understand the meaning behind it. Thanks to this teaching, we can conclude that life springs from the same source, the intelligent force that some call God.

The sacred geometric shapes are never fixed on only one form. They are, in fact, in constant fluid transcendence and change from one geometric shape to another with their speed and frequency. Sacred geometry helps us see the infinity in us; that infinity of which we are all part of.

Sacred geometry explains the symbolism and purpose of shapes based on their proportions. Mathematical equations make up our Universe, other dimensions/Universes, and galaxies. It is the process of aligning the heart, mind, and spirit with the Divine Energy/Source.

Common Forms of Sacred Geometry (and Their Meanings)

1. Triangle
It symbolizes balance and harmony and can be associated with body, mind, and spirit. If directed upwards, it indicates raising awareness. When directed downward, it is associated with feminine energy and reproduction.
2. Circle
The circle is a perfect geometric shape. It is the only shape with no end, and it is infinite. The circle symbolizes perfection, wholeness, unity, infinity, and eternity.
3. Sphere
The sphere is the holiest and deepest symbol that contains all wisdom. All other forms are organized from the sphere shape. It is an expression of unity and equality – our planet Earth is a great example.
4. Square
This form represents solid/practical energy, foundations, grounding, strength, stability, and balance. For example, the base of the pyramids is exactly square, so this shape is considered reliable.
5. Spiral
The spiral represents a universal connection. Energy moves in that form. Quote “What goes around, comes back around” perfectly describes this shape. It defines the relationship between Heaven and Earth, our physical and inner selves.

Our world is a combination of five sacred forms. These forms are known as Plato’s bodies. Every form corresponds to one of the elements: Earth, Fire, Air, Water and Ether. These forms are believed to have the power to open communication channels to the Deity.

What are the Different Forms of Sacred Geometry and their Meanings?

Have you heard of the term space architecture? This term refers to Sacred Geometry. Since the ancient past, people have tended to express what they see, hear, and feel via drawings and images.

Nature itself has left its mark through perfect figures such as a cube, a sphere, a circle, a hexagon. While observed, these figures meet both cerebral hemispheres the desire for logical and subjective data.

The basic idea behind sacred geometry is that there are specific patterns that occur throughout the universe. These patterns can be seen in everything from a leaf to a galaxy. The basic belief is that these shapes contain some sort of hidden meaning or power.

Some examples include the golden mean, the Fibonacci sequence, the flower of life, and Metatron’s cube. These geometric shapes can be found in many places around us including artworks like paintings and sculptures as well as natural structures like flowers and crystals.

Different forms of sacred geometry include:

* Mandala – The mandala is a sacred geometry that has been used for centuries by cultures around the world to represent the universe. It is a circular pattern that symbolizes wholeness.

* Star of David – The six points of the star of David represent the six dimensions of space and time. The two triangles represent the duality of man’s nature as both good and evil. The circle at the center represents God, eternity, and unity.

Which Are the Most Popular Sacred Geometry Shapes?

* Hamsa – The term Hamsa comes from the Arabic word Khamsah, which means five (five fingers of the hand). The Babylonians believed that Hamsa was the highest power that governed both heaven and earth. Christians named Hamsa the Hand of Mary (Mother of Jesus). The Jews named it Mirjana’s hand (Mirjana-Moses’ sister). In the Muslim world, Hamsa is the hand of Fatima (Muhammad’s daughter). Hamsa symbolizes fulfillment, joy, happiness, permanence, peace, pleasure. On the other side, it protects from negative energy and evil.

* Tree of Life – A universal symbol that reminds us that we are not alone and there is something more than ourselves. It is known in most cultures and religions and defined as a map of divine qualities. It symbolizes strength, fertility, spiritual transformation, power, and growth. It dates back to Ancient Egypt, which is 3000 years ago. It is the center of Kabbalah (mystical Jewish tradition). The tree roots are connected to the branches at one main point. That displays the connection between heaven and earth, physical and spiritual. Humans are like the tree of life—the point of intersection between us and the divine source itself.

* Metatron Cube – It represents God’s will within our world. The Archangel Metatron (angel of life) supervises the energy and flow in this mystical design. The Metatron Cube contains all forms that exist in the Universe. Those shapes are the basis of all physical matter and are known as Plato’s solid matter. Plato connected them with the physical elements and the spiritual world. They appear in everything from human DNA to crystals. This shape allows for harmony and balance.

* Ying and Yang – It is one of the most famous and represented symbols in Chinese culture, but also beyond. It teaches us that there are always two opposing sides in everything. It describes two principles where each contains an element of the other one. The masculine principle (Yang) represents the sacred side, air, and fire. The feminine principle (Ying) shows the dark/passive side, water, and earth.

In Yang, we recognize the Sun, the south, the summer, the creativity of the mountain, the fire, the heat. In Ying, we recognize opposite concepts such as the moon, night, earth, north, cold, calm, valley. It is not difficult to conclude that Yang directly connects with life, while Yin resembles dying.

This separation of concepts gives a picture of the importance of Ying/Yang energy. The best display of energy perfection is dawn.

I hope you’re finding this information to be helpful to you. In my quest for a lifestyle by design, I enjoy exploring topics unknown to me and sharing them with you as one of my community members. Please reach out to me any time to share your thoughts, ideas, and opinions about the world we live in.

I’m USA Today and Wall Street Journal bestselling author, entrepreneur, and marketing strategist Connie Ragen Green, cultivating habits of excellence every day with my words and deeds. Come aboard for my Action Habits Challenge at no cost or obligation and continue a journey that you’ve most likely already begun.